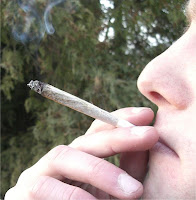 Yesterday was the first day that Massachusett's new law decriminalizing possession of less than an ounce of marijuana goes into effect but a number of Massachusetts law enforcement officials are claiming they don't know how to enforce it.

"I think there are a lot more questions than answers right now," Lawrence Police Chief John J. Romero said of the law. "I don't think anybody knows how this is going to play out." Boston Globe, Dec. 25.

In the same article, Berkshire District Attorney David F. Capeless, president of the Massachusetts District Attorneys Association, said he wonders if police officers who light up a joint after work will be able to be disciplined beyond the $100 fine the new law requires.

Some of this bewilderment on the part of law enforcement officials may actually be an attempt to get the Legislature to delay or overturn the law, which was one of three ballot questions on November 4. Capeless has already asked Gov. Deval Patrick to ask the Legislature for a delay, which Patrick had declined to do.

The question was overwhelmingly approved by Massachusetts voters on November 4 with 65% of the voters agreeing possession of less than an ounce of marijuana should be a civil rather than a criminal offense.

Some police chiefs are simply declining to enforce the law, hoping that will force the Legislature's hand.

Andrew J. Sluckis Jr., chief of police in Auburn, said his 39 officers would not be issuing $100 citations for possession of an ounce or less of marijuana, as required under the ballot initiative known as Question 2.

"If the Legislature enacts some changes, we'll be happy to do it in the future, but as it stands now we're not going to be issuing civil citations," he said. If an officer spots someone smoking marijuana, he said, "We will confiscate it and the person will be sent on their way."

"It is frustrating," he added, "because we have to deal with a law that is almost non-enforceable at best." Boston Globe, January 3.

Two problems in particular are cited by law enforcement officials:
There's no check-off box in their current citation books, and
Because the offense is civil rather than criminal, people may choose to give false names to officers without fear of penalty.

Not all cities and towns are refusing to enforce the law, however. Worcester and Boston police officers have received training memos about how to enforce the law, and on Friday, a Springfield police officer issued what may be the first citation in the state to a Holyoke man. The man will have much more to worry about than a $100 fine, though: he was also caught with sizable amounts of heroin and crack cocaine.

The vast majority of marijuana smokers, however, being largely indistinguishable from the general population, will simply be enjoying the freedom from fear of arrest that the new law brings. It's been a long road.

Truthfully, the vast majority of marijuana smokers are pretty identifiable to the general populations. You can smell them coming. Seriously.

""It is frustrating," he added, "because we have to deal with a law that is almost non-enforceable at best." Boston Globe, January 3."

There may be some confusion around the law but most of law enforcement's comments are disengenuous.

(At least I decided against quotations for the title word "bewildered!")