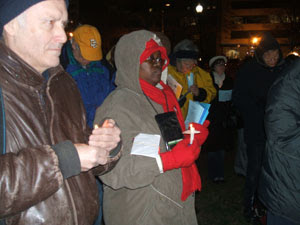 The L.A. Times is reporting that police have arrested Benjamin Mathew Martin in the gruesome burning death of John McGraham last October. Apparently the motive was pure personal dislike. I posted about his death and others last year, but so many homeless deaths have continued to occur, it's impossible to keep up with all of them.

A homeless man was one of two people shot to death last Wednesday in Brockton, Massachusetts by a man looking for "non-white" people to kill. Arlindo Goncalvis, like many homeless people, made a few dollar a day collecting cans, which he was doing when he was killed. Mr. Goncalvis was also a musician who carried a keyboard and played around town, where he was well-known. the Daily News Transcript has more about Mr. Goncalvis' life and death.

A homeless man who lived in and watched over a junkyard in Blue Island, ILL was found shot to death last Thursday. Ryan Briggs was 36. the Chicago Sun Times has a little more information, but there's not much info available so far.

On Christmas Eve, 61 year old Yoshio Nakada was found dead on the George Washington University campus in Washington, D.C. where he was well-known. He'd received a number of severe blows to the head and his skull was fractured. Although Mr. Nakada spoke little English, he liked to sing and had recently been attending Quaker services, where he occasionally spoke in his native language. The student newspaper GW Hatchet has a report on the murder's impact on campus.

Woodstock, ILL police are still searching for a motive in the stabbing death of 28 year old Robin Burton, allegedly killed by Kyle Morgan, who brought Mr. Burton to his apartment and then killed him. Morgan's MySpace page, since taken down, seemed to show an interest in serial murders. The Daily Herald is following the story.

Of course not all homeless deaths are the result of murder. Many die quietly from illnesses exacerbated by being homeless. Other-- too many-- die from exposure, and I expect this winter to take a particularly high toll. Tallahassee.com reports that weather was a factor in the death of 42 year old Stacy Bradish, who was sleeping outside in a campsite and could not be awoken the next morning by his friend. Eric Victor Spence was probably trying to get kerosene for his heater when he couldn't go on anymore. he was found dead with an empty gasoline can nearby in the woods in Taylor, MI, the News Herald reports.

Safety is not guaranteed by seeking shelter, however. In early January, five men died in a swift-moving fire at a men's shelter in Paris, Texas. Earlier this week, a homeless man was stabbed-- fortunately not fatally-- at the Worthington St. Shelter operated by Friends of the Homeless here in Springfield, MA, my home city. Overcrowding often leads to short tempers and Worthington St. is packed to the gills.

While the total of homeless deaths will almost surely be higher for 2008 and 2009 than ever before, our information will remain sketchy and anecdotal, because no agency or governmental body tracks these deaths. Each year, dozens of cities participate in the Homeless Persons Memorial Day on or around December 21st, the longest night of the year, but far more cities let these deaths go unremarked.

Photo from the National Coalition for the Homeless: 2007 D.C. memorial service.