654 homeless families in motels, but they're closing shelters? 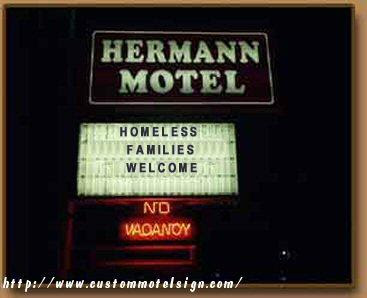 Yesterday Massachusetts state officials announced there would be a one month extension for three of the four shelters in Western Mass. for which the state is terminating funding.

No more extensions after that, the state says.

What I don't get is why any shelter would be closed when 654 families are living in motels because there's no room at any of the shelters where 2,647 other homeless families are already placed.

All of this closing and shuffling families around is part of a state re-organization which may or may not actually benefit families. The goal is to place families into housing more quickly. Hope it works. Of course, families have to be able to afford that housing.

Earlier this month the Deval Patrick Administration announced that homeless services for families would be transferred from the Department of Transitional Assistance to the Department of Housing and Community Development. The philosophy behind this move is to hook families up to housing as soon as possible. Unfortunately DHCD has no infrastructure in place to handle this and has never directly served any individual and has no offices outside of Boston. We'll be starting a bureaucracy from scratch for the commonwealth's most vulnerable families .

Of course, placing families in motels rather than shelters is cheaper for the state: pay for one room instead of paying for a building and support staff to assist the homeless family in gathering the resources to find an apartment.

It's not cheaper for families, though. These motels don't have cooking facilities. That means families have to buy prepared food or take the kids out to McDonald's to eat, if a restaurant or market happens to be nearby-- no guarantees. And most motels are in commercial areas nowhere near hospitals or social service agencies. In Springfield, bus fare is $1.25 each way for adults and .75 for each kid between 6 and 12. Living with one to five children in one room in a motel is isolating and depressing enough as it is; saving any money from a miniscule welfare check is near-impossible.

Just once, I'd like to see the policy-makers ask those who are directly affected by homelessness what they think the best services and solutions are-- but that's not likely to happen.

as social work students working on a research project about homelessness in MA we are very interested in the population that you have mentioned in your article. we'd like to know more about what happened w/ the 654 families living in motels, and what happened to the ones that can't afford those motel rooms. If you could tell us where to get more information about this it would be a huge help! thanks!