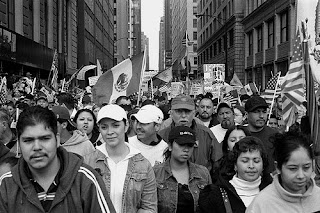 Many people think of correctional institutes-- when they think of them at all-- as sources of jobs and tax money for their economically depressed communities. But for the families of the undocumented, these facilities are black holes, sucking away their loved one.

As a resident of Western Mass. and a member of Arise for Social Justice, I fought long, hard and unsuccessfully with others to attempt to prevent the construction of a new jail for women in Chicopee. At the same time, a new jail was being constructed 40 miles north, in Greenfield. Last month, that jail became "home" to 34 immigrants transfered from the Donald W. Wyatt Detention Facility in Central Falls, R.I. Those inmates were transfered because of the death in Wyatt of an undocumented man last August.

According to the New York Times, the Wyatt facility "offers a rare look into the fastest-growing, least-examined type of incarceration in America, an industry that detains half a million people a year, up from a few thousand just 15 years ago. The system operates without the rules that protect criminal suspects, and has grown up with little oversight, often in the backyards of communities desperate for any source of money and work."

The article goes on to talk about the chilling disappearance of the undocumented who lived in Central Falls. Their families would search for them, only to find they were incarcerated in the same community where they worked and lived.

Back in December Fred Contrada of the Springfield Republican wrote about the transfer of the unauthorized immigrants to the Franklin County House of Correction in Greenfield. He also mentioned that 26 of its own detainees were transfered out to other facilities in Rhode Island to make room for the new. Thus people are separated from their families as they are shuffled from one community to another.

Addendum: In the final hours of the Bush Administration, Attorney General Michael B. Mukasey has denied unauthorized immigrants one of the few appeals to deportation that had been open to them, the right to appeal their deportation because of mistakes made by their attorneys in their hearings. You can read more here.

Communities that are home to jails and prisons count the inmates as part of their population for the Census. The addition to their population can result in additional Federal and State aid for a community. In MA, the town of Dartmouth just received approval of an appeal of their Census 2000 count based on the number of inmates their County jail houses.