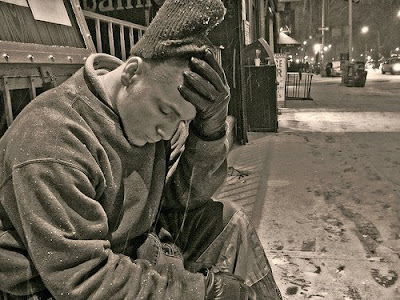 There's actually a lot of Massachusetts and Springfield homeless news to report, but sometimes I just get so disgusted by the policy people's portrayal of how "well" things are going that I can't bring myself to write about it. I'll catch up this week.

Here's what's absolutely real, though: the temperatures for the next two weeks will be well below normal and Springfield has no policy to deal with homeless people who are out on the streets. Oh, the city will say it has have a policy, but what good is a policy that homeless people don't know about?

Arise organizer Lamont has been going to city-sponsored meetings trying to get some answers, but clarity never arrives.

This week Lamont is going to attempt to find out the answers to the following questions and then make sure homeless people know the answers. We'll let you know what happens.

If a person is banned from shelter and the temperature falls below ______________, that person can return to stay at the shelter for that night.

If a woman is banned from the women’s shelter, the following measures will take place to make sure she has a place to go:

(For Office for Housing)

If a person is banned from the shelters, the following people can be contacted after 6 pm. For assistance:

When the weather is cold, the following places are available for people to go in the daytime:

If the weather is bad and a homeless person is on the streets, that person has the right to refuse shelter unless: