Best of my inbox 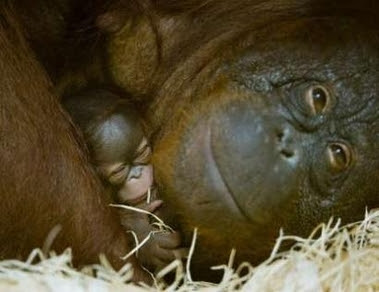 Back from vacation, seems like all I've been doing is reading emails and washing clothes. Above is from Cute Overload.

After key components of a Vermont Yankee cooling tower fell to the ground Tuesday, members of Safe Power Vermont are saying "no" to renewing Entergy's license to operate for another 20 years.

Safe Power Vermont - a coalition of experienced citizen, environmental, legal, and anti-nuclear organizations committed to closing the nuclear power plant - said that while alarming, the collapse of the cooling tower is not surprising.

"Vermont Yankee is running at 120% of its designed capacity. This surge in power combined with its already ailing infrastructure leaves Vermont Yankee incredibly vulnerable to dangerous accidents just like this one," said Deb Katz, Executive Director of Citizens Awareness Network.

Advocates questioned the clean bill of health that the cooling tower recently received from Entergy's experts. They called into question Vermont Yankee's claims that the 35 five year old reactor is not experiencing serious aging strain that jeopardizes the plant's future. "Vermont Yankee telling us that the plant is running like new is like a hair dresser telling you that you look twenty years younger, its nice to hear but far from the truth," said James Moore, Clean Energy Advocate for VPIRG.

The plant's history of defects and accidents is not insignificant. Just in the past decade, Vermont Yankee has documented 76 cracks in its steam dryer, three fires in its transformer station, a dangerously overcrowded spent fuel pool for radioactive waste and now a cooling tower collapse. Despite this, Entergy is aggressively looking to extend the plant's license to operate for an additional 20 years.

Advocates also noted that Vermont Yankee benefited from the recent expiration of a rate payer protection plan. This fact will leave Green Mountain Power, Central Vermont Public Service, and Vermont rate payers with higher bills in the future.
"Any further reliance on Vermont Yankee will pass on to future generations both financial as well as safety risks. Vermont Yankee was built to run 40 years and at 35 it is already testing "father time", the plant must close in 2012," said Ed Anthes of Nuclear Free Vermont.

In accordance with Act 160, the Vermont legislature has the power to prevent Vermont Yankee from running past its 2012 lifespan. Safe Power Vermont says the coalition will continue to work for the facility's closure to prevent a seemingly inevitable accident of catastrophic proportions.

Two years after Katrina, the Gulf Coast is still recovering, and thousands of personal stories remain unheard. Experience them here. Tell us yours. VOICES FROM THE GULF.

The donations will provide funding to support other cultural activities at El Mercado including poetry readings, art shows by local artists. For further information call 413-687-0399 or cena.elmercado@gmail.com

CENA is where the community can create, see, support, and learn about different artistic disciplines and promises to enhance the South Holyoke neighborhood, assist in the revitalization of Main Street Holyoke, and bring resources to the area. This space serves as an anchor to a network of programming and educational opportunities related to cooperative economic development in conjunction with other community institutions, programs and institutions of higher learning.

ONE MORE TIME! READY TO GO TO WASHINGTON, D.C. AND SAY NO MORE WAR?
*September 29: March Against the War at Home & Abroad


FOR INFORMATION on BUS TRANSPORTATION FROM WESTERN MASS. for the Sept. 29 "Healthcare Not Warfare DC Mobilization," phone us at 413-896-5219 (Springfield) or 413-587-0059 (Northampton), or email wmassiac@hotmail.com please type "S29 DC BUS" in your email's subject line.Troops Out Now.

Walking the same beach over many years 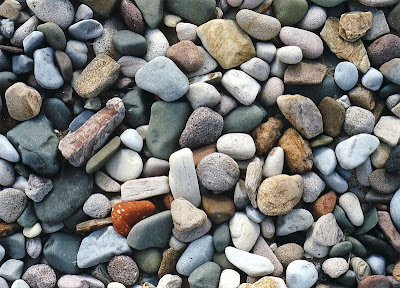 I'm glad for all the stone
that I was strong enough to carry home.

Some summer I will know
such strength, I will return alone.

The perfect first victim
in this mystery novel:
the cat he never wanted
but grew to love

What kind of energy solutions do we want?

The Ecologist
No comments:

Bats in the house 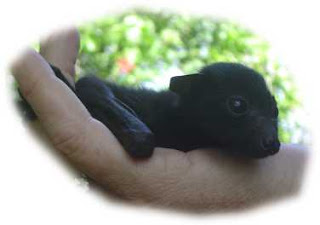 I have just combed the Internet looking for pictures of cute bats and let me tell you, they're not easy to find. I recognize that an unpleasant childhood experience and too many Dracula movies have shaped my perception. Surely baby bats are cute to their mothers?

I've had a bat in my apartment every night for a week-- a different bat each night, I think: one was VERY BIG and flew high; one was smaller and flew in the middle range, then another big one, then another small one, et cetera et cetera.

The first night I laughed at myself as I crawled on my hands and knees from the living room to the kitchen to open the porch screen door so the bat could get out, which eventually it did.

The second night I slunk along the walls to repeat the process.

By tonight, I'm, like, Gosh, it's hard to relax with a bat in the house. I actually walked to the porch door to open it.

My cats have been unsurprisingly useless, in fact only mildly interested in the whole bat affair.

I know bats are good for the environment-- they eat tons of bugs-- and they're mammals, they nurse their babies, they're not aggressive and some species are endangered.

Still, I'd rather not have them in the house, but from what I've researched, it's pointless to try to find where they are nesting in the house and seal them in because they have babies and they would die inside the walls and not smell very good. It has to be done between November 15 and March 15. I will try to do it before the holidays. I don't expect my growing (and possibly temporary) sang-froid will extend to my company.
~~~~~~~~~~~~~~~~~~
Two hours later: I'm talking to my friend and fellow Sagittarian Holly on the phone.
"By the way, do you know anything about bats?" I said.
"Bats! I had a frigging bat in my house for three days," she said. "I was starting to think I'd just have to outlive it." 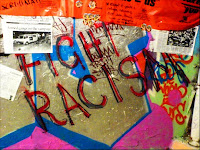 I doubt he had any idea that today, when he announced the city was ready to begin diversity training of its employees, that eight of those employees would be announcing a racial discrimination lawsuit at nearly the same time!

Irony of ironies, the fellow he announced would be doing the training, Tom Belton, was one of the eight (plus attorney Devin Moriarty) standing on the steps of City Hall as they talked about decades of being passed over for promotions, not receiving raises, and being subjected to insensitive remarks by white co-workers.

Mayor Ryan is still trying to handle the fallout from the February resignation of his Chief of Staff Michelle Webber. Webber resigned after Rep. Cheryl Rivera went public with accusations of racism against Webber, accusations that Webber denied at the same time she apologized to anyone she might have offended.

Of course discrimination at City Hall didn't start with Mayor Ryan, and it looks like it won't end with him, either.

I remember a former city councilor of color telling me I just had no idea what it was really like for people of color during the Albano administration, and why that councilor was choosing to support former state representative Paul Caron for mayor instead.

And lest we forget, this is Ryan's second go-around as mayor of Springfield. In his first term, Ryan called in the National Guard to make mass arrests at a peaceful demonstration of African-Americans at Court Square. They were there to protest the arrests of African-Americans who had been clubbing at the Octagon Lounge. One of those arrested is our current State Rep Ben Swan.

Ryan also ushered in the "Strong Mayor, All At-Large City Council and School Committee" election system which has resulted in only six people of color being elected to city council in forty-five years.

In another irony, Rep. Rivera's accusations against Michelle Webber in Ryan's second time in office were part of the trial affidavits we submitted in our federal lawsuit against the City of Springfield to challenge Springfield's all at-large voting system-- Arise for Social Justice, Oiste, the NE Chapter of the NAACP and a number of individual plaintiffs.

A binding question to change to an "8 ward,5 at-large" system will finally be on the ballot this November.

I know that as a group, we white people don't understand how much our well-being is bound to the well-being of people of color. Social injustice skews our reality like a funhouse mirror. But we can change. I see it all the time.

The State of Tent Cities in August 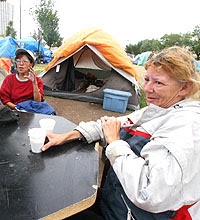 NEW ORLEANS: Homeless people and advocates have been camped out in a pavilion across from City Hall since July 4th to protest the lack of housing in the post-Katrina city. Blogging New Orleans. For a more in-depth look at the New Orleans housing crisis, check out the People's Hurricane Relief Fund and Oversight Committee.

In King County, WA, homeless advocates from ShareWheel took over some apartment buildings to protest their demolition. KNDO TV. ShareWheel runs one of the nation's longest-operating tent cities.

Edmonton, Alberta's homeless encampment is being fenced in by the city and residents are not happy. Not only will residents now have to have official ID cards, no one new is being allowed in. Edmonton Sun.

San Francisco's Mayor Newsom is determined to clean up all the homeless encampments in the city. For the story of one clean-up, see SFGate. Here's one man's story of how he became homeless and what it took for him to get out.

You talking to ME?

A few weeks ago I stayed overnight at my daughter's house. I went outside about 6:30 am. the next morning to sit on the stairs and have a smoke.

A car pulled up across the street and a woman got out. She was talking to herself as she walked towards a neighboring house and in the morning's quiet I could hear her clearly.

I had about two seconds of thoughts rushing through my mind--My God, she sounds suicidal. Does my daughter know who she is? Should I say anything?-- before I realized she was talking on a cell phone.

Yesterday I saw two girls walking side by side down Hancock St. I won't say walking together, as each was on a cell phone talking to someone else!

I'm not a Luddite although I'm concerned about the consequences of technology driven by profit. But I wonder what it means that so few of us can stand to be alone with ourselves, Rather than cherish what little silence we have in our lives, we fear silence and try to banish it.

For a more cautionary look at cell phones, check out this Alternet article by Stanley Cox.
1 comment: