Food shortages not in the news but scarcely over 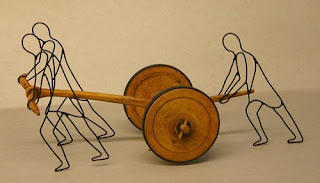 The Guardian's Jayoti Ghosh has an excellent article about the increasingly low media profile the food shortage is receiving. Remember the riots in Haiti? The famine in Liberia? Rice hoarding in the Midwest of America? Is it over?

"No, the "silent tsunami" has simply been overwhelmed in public awareness by the much noisier tsunami in the world of international finance, with the giant sucking sounds of possible bank collapses and enormous bail-outs grabbing all the attention. Yet the global food crisis is far from over, and is even likely to intensify in the near future," Ghosh writes.

Falling crop prices this year after two years of massive increases may have led policy makers to believe they could pay less attention to the issue. The U.S. had a bumper crop of grain this year; crop prices fell 40% in Australia. Somehow, though, those bumper crops and cheaper prices are not putting any more food in people's bellies.

Weather and insect plagues can cause food shortages. Extremely cold temperatures and gasoline shortages in Bosnia have completely cut some villages off from food. Floods have washed out roads in the Philippines have prevented food from being delivered. Be glad you're not a Liberian farmer, having to flee your lands because of an invasion of Army worms-- fierce caterpillars that eat anything in sight. News24.

Climate and poor soil can reduce crop yields. Much of Kenya's soil is nutritionally depleted and the severe drought is pushing the people toward famine. Drought in Burundi has caused thousands of families to flee to neighboring countries in search of food.

Ghosh points to three main causes of of the food crisis:
All of these forces are less obvious in the United States but still have their role to play. Over the last three years, one in nine Americans has experienced food insecurity. That means that 13 million households went hungry some time during each year. Oddly, though, poverty in America tends to equal obesity. In 2004, Jefferson County, one of the poorest counties in the country, also had the dubious honor of being the most obese. You get more calories from a dollar's worth of carbohydrates than a dollar's worth of fruit.

In the capitalist global economy, corporations have to make a profit to survive. But where do we draw the line? This month Monsanto, the world's largest seed corporation, boasted its quarterly earnings have doubled over last quarter. To understand Monsanto's stranglehold on agriculture, see Vanity Fair's May, 2008 article.

We are unlikely to be able to change agricultural policy until we can make sense of it.