Hands off my marijuana law! 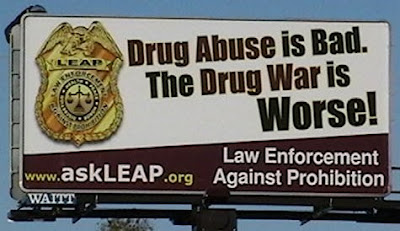 One would think that when 65% of Massachusetts' voters said that we approved of decriminalizing marijuana, that that would tell our elected officials all they need to know about the will of the people. But oh, no! The law is less than a month old and already municipal officials are trying to toughen the penalties.

Massachusetts joined eleven other states on January 2 when we voted to decriminalize possession of less than an ounce of marijuana, replacing a criminal penalty with a civil fine of $100. Almost immediately, law enforcement officers began complaining that the law was unclear and would be difficult to enforce. In particular, officers said that those offenders who were issued citations could easily give a false name. Maybe that could happen in Boston, but it certainly won't be happening in small towns and every other city where police are quite likely to know the faces of most of the population. I'm not sure what the penalty for giving a false name to the police is in Massachusetts, but why add insult to injury?

The state has already issued opinions that the new law does not mean schools must now tolerate marijuana possession in schools, and that employers can continue to forbid marijuana possession in the workplace. But a Cape Cod lawmaker, Rep. Cleon Turner, D-Dennis, plans to propose a law making three unpaid citations to possession in a one year period a criminal misdemeanor offense, punishable by up to six months in jail and a $1,000 fine, as well as a law to make explicit the right of schools and workplaces to ban marijuana on the premises.

Apparently most lawmakers haven't caught up with the public's growing distaste for the war on drugs as it's been fought the last thirty years, because now some municipalities want to get in on the act and make their anti-drug position very clear.

Framingham's Board of Health wants to add smoking marijuana to the already in place law against smoking cigarettes in restaurants and other public places, and institute a series of fines for establishments that allow such smoking to take place.

The Methuen City Council wanted to increase fines for possession of less than an ounce of pot to $400, but compromised at $200 after public opposition.

Now , this Monday, the Springfield's City Council will consider Councilor James J. Ferrera III's proposal to make smoking marijuana in public an arrestable offense with a $300 fine (emphasis mine).

The proposal is supported by Police Commissioner William Fitchet but talk to many law enforcement officers off the record, and they'll tell you they support decriminalization of marijuana. Many want to bring the drug war to an end altogether. Members of Law Enforcement Against Prohibition (LEAP), not all of whom are retired, make a strong case for decriminalization based on their first-hand experience.

Meanwhile I expect that a lot of law enforcement officers are not going to go out of their way to issue citations; in fact the first citation under the new law issued in Massachusetts came after a Springfield police officer arrested a man for possession of crack cocaine and illegal firearms possession.

For the first time in a number of years, we have a chance for a sensible drug policy to prevail in this country. let's hope local officials don't drag their feet.

I strongly believe that the voting numbers would have been no where near 65% if the public knew what they were actually voting for. The commercials made it seem that 1 oz. of marijuana was a tiny amount, and that the fines would bring money into our state.

In reality, one ounce of a lightweight substance like marijuana is a lot more than most people imagine. And with the way the law is written, it will be easy for people to evade paying the fine.

Why are you so quick to give the benefit of the doubt to all pot smokers, yet automatically assume bad intentions on the part of law makers and law enforcement? Would you be in favor of other laws, eg. anti-pollution legislation, being so loosely worded and un-enforceable? I doubt it! But you essentially want pot to be legalized, so you will criticize anyone who tries to turn this blank-check wording into an actual law!

HAVE SOME FAITH IN YOUR FELLOW CITIZENS; your assertion that they are uninformed and / or naive is insulting; we've been having this debate for 30 years for pete's sake.

One ounce of any substance is still an ounce; it's not like anyone can run a criminal enterprise at that level of distribution.

Why are you so quick to assume the billions spent by our gov't on the war on drugs does anything to curb their use? So far, no luck. We can imprison all the pot heads in the world, we'll still have SERIOUS drug offenders (meth heads, rush-limb-er-prescription drug addicts, & alcoholic wife beaters I'm looking at you!) and serious problems. No one ever gets violent for and from pot. Period. ASK A COP. Ask the SPD officers who cover hemp fest - it's literally the calmest event of the year.

In regards to your assertions of loosely worded laws and un-enforceability - the founding fathers thought it worked rather well to make loose declarations then allow the social and legal systems the freedom to modify them to fit their needs. The poster even addresses the various modifications (no public smoking et al) on the books or in consideration, so again your arguments fall apart.

At heart, I think we allow our citizens some strange freedoms - you can poison yourself as much as you want with nicotine or alcohol, or with a stolen / misused prescription - or Tylenol, which leads the pack for # of people harmed - you can buy assault rifles or build an arsenal of weaponry - but you MUST NOT SMOKE DITCH WEED (that was, for the first 150 years, a gov't subsidized cash crop) - even if you happen to be dying of cancer, suffering terrible pains (and not wanting to dope yourself up on addictive, legal and expensive replacements)... Finally, we seem to be reaching some logical decisions about cannabis, let's continue down the road and see where it leads us. If you feel so vociferously about cannabis, think about the MUCH LARGER amounts of harm second hand cigarette smoke has already done to you and go beat that drum. Or, statistically, you or someone you love has been harmed by alcohol (either by a drunk driver / abusive family member / liver poison) - worry about something that actually might harm you, in other words.

What the police are saying is that any non-indictable offense tied to a non-moving violation is impossible to enforce. Basically, if they can't say "papers please", they are claiming that their powers are moot. It is exactly this kind of attitude which has transformed police into an occupation force, rather than a tool that preserves the peace.

Take jaywalking for instance: it's illegal in just about any metro, yet it's a non-indictable offense. In these and many similar situations, police rely on moral suasion to affect behavior.

If police have forgotten their "soft power", then they are no longer police, just a poorly paid juntiad.

To the other anonymous poster:

We can agree to disagree on how harmful pot is or to what extent it should be restricted. But please don't insult me by putting words in my mouth or making assumptions about my opinions. You know nothing about me, nor how much faith I have in my fellow humans. On a daily basis, I interact with people from all walks of life. My opinion is that people were misled by the decriminalization commercials, not that these people are naive or ignorant. I come to this opinion after discussing the issue with many different people, not just folks like myself.

Nowhere in my post did I say that the current drug policy actually works to curb use. I recognize that there are serious problems with the "war on drugs." However, I do not think that this law, as it is written, will make a positive impact in our Commonwealth. Guess what? If the law were slightly different, I would have voted for it! I am not in favor of a kid getting in trouble for possessing a couple of joints. I would LOVE to have more money coming in to our state from these fines, IF I thought they were enforceable.

Regarding the Bill of Rights: As you say, while the original declarations were broadly worded, they need regulations to clarify them. You can't yell fire in a crowded theater, can't bring a gun into school. Although the original post does mention the proposed modifications to the law, it does so in a very negative way. At least, that's what I took away from the title "Hands off my marijuana law" as well as from the rest of the post. Michaelann, if I am wrong about this and you are actually in favor of these regulations, please correct me.

Finally, you mention second-hand cigarette smoke in your argument. Actually, I am already "beating that drum." I know a little about this, having grown up exposed to second-hand smoke and having had two family members die and one have a very close call as the result of smoking cigarettes. Well, pot smoke is also harmful, both to the smoker and to anyone nearby who might breathe it in! Why condemn one and not the other?