Closing parks to the homeless - everyone suffers 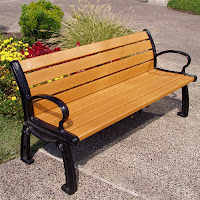 Joel John Roberts at L.A.'s Homeless Blog has a post on a trend that hurts everybody-- closing parks to the public when homeless people start spending time or sleeping there. He found an article by Kay Ebeling at the L.A. Buzz Examiner which explores the exclusion of homeless people from aspects of life we take for granted-- like going to the park.


Last couple times I’ve tried to go to a park where I live on the near West Side of LA, the few square feet of green was cordoned off with police tape. The response to a growing number of homeless people living in parks all over this city is for the city to shut down the parks. Eight foot high spiked fence keeps people out of Lafayette Park, police patrol cars and yellow crime scene tape keep you away from any greenery in Beverly Hills or strips of respite that used to line Wilshire Boulevard.
Still there are people trying to find a place to just sit for a few hours and rest.

Say, that 'minds me-- whatever happened to the Mayor of Springfield Domenic Sarno's promise to return park benches to the city's central jewel, Court Square? It's been more than three years since the park benches were removed as part of a renovation long since completed. Of course, it's winter, now, so the city has an excuse. Maybe we can finally get some action in the spring.