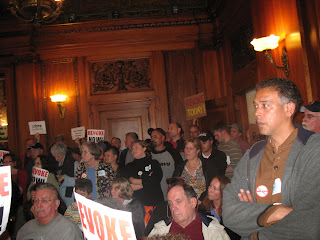 To be blunt, this has not been a good week for biomass opponents and the residents of Springfield.   At Monday night's city council meeting, we expected councilors to authorize themselves to appeal the building permits issued to Palmer Renewable Energy for construction of a biomass plant.  Instead,  an obviously choreographed effort   between city solicitor Ed Pikula and Councilors Walsh, Ferrera and Rooke paved the way for Walsh to introduce rule 20, bringing the proceedings to an abrupt halt.   Western Mass. Politics and Insight   has an excellent blow-by-blow description of the evening's farce.


"Don't worry, we'll fix this on Monday," Councilor Mike Fenton told us, and I believe that he and the other nine councilors who also appose this biomass plant will prevail,  but it gives the council less time to file an appeal-- the deadline is December 15.
We've had some members researching campaign contributions from PRE's owners, family members and attorney, but the Valley Advocate summed it up nicely for us before we could finish. From the Callahan family:
From Callahan's attorney, Frank Fitzgerald:

Now, do I think a councilor's vote can be bought so cheaply?  Possibly.....but what I actually suspect is that there were far more substantial offers of assistance, financial and otherwise, made to city councilors by PRE this year, which will never appear in a list of campaign contributions.  I suspect that that if city councilors revealed the extent to which they have been lobbied and cajoled, we would be shocked.
But what I absolutely believe is that no city councilor should accept a financial contribution from any person who has business before the council and who would benefit financially from a council decision.


Second piece of bad news: just today, DEP handed down a "recommended" decision about our air permit appeal, basically saying that citizens have no "standing" to appeal a DEP-issued permit!  On the advice of attorneys, I'm not going to comment on our legal strategies at this point in time (except to say we still have plenty!), especially as the decision is not final until approved by DEP Commissioner Ken Kimmel.  Our press release is below.
I do, however, want people to think about the ramifications of this decision if it is upheld.  Clearly, DEP would not apply this decision only to PRE opponents, or only to those appealing air permits.   Think about it.  And we'll talk more later.
JOINT STATEMENT IN RESPONSE TO THE
MA DEP’S RECOMMENDED FINAL DECISION
ON THE AIR PERMIT APPEAL REGARDING PALMER RENEWABLE ENERGY
BIOMASS PLANT IN SPRINGFIELD, MA
Office of Appeals and Dispute Resolution Says
No One Other than Developer Can Raise Administrative Challenges to
Power Plant Air Permits – Not Even Affected Residents
BOSTON, MA  November 30, 2011 – Conservation Law Foundation, Arise for Social Justice, and Toxics Action Center today issued the following joint statement in response to the Massachusetts DEP’s recommended final decision on the air permit appeal for Palmer Renewable Energy’s proposed biomass-fueled Power Plant in Springfield, MA.
“This decision, if adopted, would change the rules so as to prevent affected members of the public from participating in administrative appeals of air permits. It also would undermine the state’s clean energy agenda. The recommended decision, which does not address the substance of the petitioners’ claims, essentially says that no one other than the developer has the right to raise administrative challenges to power plant air permits – not even people already suffering from severe respiratory illness, nor people suffering from disproportionate air pollution burdens. We look to DEP Commissioner Kimmel to reject the recommended decision and preserve the right of Massachusetts residents to have a voice in decisions that affect their health.”
The Conservation Law Foundation (CLF) protects New England’s environment for the benefit of all people. Using the law, science and the market, CLF creates solutions that preserve natural resources, build healthy communities, and sustain a vibrant economy region-wide. Founded in1966, CLF is a nonprofit, member-supported organization with offices in Maine, Massachusetts, New Hampshire, Rhode Island and Vermont.
# # #
No comments:

Who owns the radioactive fallout from Japan?

Here's a good one-- the owners of the Fukushima No. 1 nuclear plant, which spewed radioactive materials over much of Japan, say they don't "own" the material, and that it now belongs to the people on whose property it fell!

I wonder if Palmer Renewable Energy will say that the air pollution that would come from their proposed plant 'belongs" to the breather?
No comments:

Don't let the 1% pollute our air in Springfield!

Please forward this to your friends and coworkers!
Springfield residents should contact their city councilors to support these resolutions and contact Governor Patrick to urge him to uphold state law.
Springfield, MA - November 17, 2011 - Members of Stop Toxic Incineration in Springfield (STIS), a volunteer group opposed to the building of the Palmer Renewable Energy (“PRE”) biomass incinerator, are outraged at the issuance of the building permit by Springfield Building Commissioner Desilets that would allow construction to begin on the incinerator.  According to Lee Ann Warner, STIS spokesperson, "This permit flies in the face of the Springfield City Council's 10-2 revocation vote of PRE's special permit.  It sets a very dangerous precedent for Springfield to allow utility-scale incinerator development within the city limits without any special permitting.  This effectively eliminates the public’s voice in decisions that affect our health."
Patrick Markey, concerned Springfield citizen and attorney, states, "The city’s issuance of a building permit for the PRE incinerator is contrary to the requirements of the City’s zoning rules.  The facility lacks a necessary special permit."
Sue Reid, Director of Conservation Law Foundation – Massachusetts, added "The issuance of a building permit to PRE is directly at odds with the City Council’s revocation of PRE’s Special Permit.  In addition, PRE’s rush to secure an unlawful building permit is baffling:  state law prohibits PRE from beginning any construction because it does not have a final air permit.”
On Monday, November 21, at 6:30 pm in City Hall, the Springfield City Council will meet and vote on two resolutions concerning the PRE biomass incinerator.  Michaelann Bewsee notes, "The first resolution would reaffirm City Council’s finding that the PRE Biomass plant is an incinerator that requires a special permit on land zoned Industrial A.  The second resolution calls on the state to enforce its rule of no construction of a polluting facility prior to issuance of a final, non-appealable state air permit.  The people of Springfield spoke loudly and clearly that they do not want – and should not have to tolerate – any more pollution in our already overburdened city.  We commend the city councilors for acting on behalf of the people and support them in passing these resolutions."
Thank you from the volunteers at STIS, www.springfieldincinerator.info.
No comments: