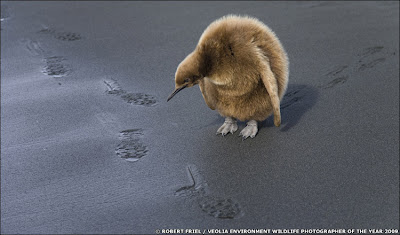 Robert Friel's Highly Commended image from this year's Wildlife Photographer of the Year competition. The king penguin chick was caught examining footprints in the sand on the sub-Antarctic island of South Georgia. WPY is run by the Natural History Museum and BBC Wildlife Magazine. From the BBC.
No comments:

Living to organize, organizing to live 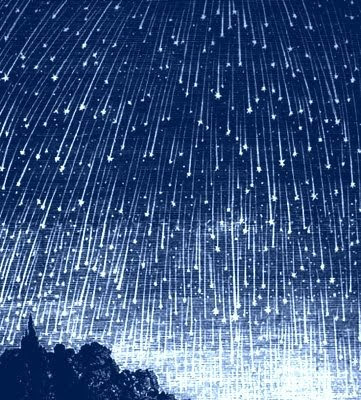 I've said this blog is not my journal yet the last two days-- last two weeks, really-- have been a more challenging blend of the personal and the political than I usually have to balance, and I'm going to write about some of that here. Maybe I wouldn't if I were the center of the drama, but-- to the degree it's possible-- I'm not.

So, checking in: I'm still unemployed.

Bad news: broke and sixty-two years old, but, as my younger daughter said to me once, "We're not poor, mom, just broke."

Good news: I have more time for organizing. We'll have our first elections with ward representation this fall, and Arise hopes to have a candidates' night with the NAACP for the at-large candidates for city council. All seems to be going well, we've got a number of good folks seeking office, and the word is getting out. We still have a lot of door-to-door outreach planned.

Most of my organizing time has been going into researching how Palmer Renewable Energy's proposal for a biomass plant in Springfield has gotten as far as it has. I'm finding it quite fascinating. What I can tell you right now is that apparently nobody in a position of authority was watching the store, on either a city or a state level, when it came to deciding whether or not this plant was a good idea for Springfield. Nobody was watching out for us, but why should that surprise anybody?

Did you know that Springfield is designated as an Environmental Justice Community, therefore requiring that we receive enhanced public participation when it comes to siting proposals that may have a negative impact on our community's environment? Well, neither did I. One of the questions we have to ask ourselves is, Why? I'll have a lot more to say about the Why later on-- just a bit more research to do.

For those of us who hope against hope that Springfield can turn around from its economic decline, why would we want a project that will pollute our air and further drive down property values?

Meanwhile, on the home front, my sister Liz, the economic justice organizer for Arise, had been plagued with weakness and numbness for some months. She was finally diagnosed with either an arachnoid cyst on her spinal cord or a spinal cord herniation, and she underwent a six hour surgery last Tuesday, where it turned out she had a non-malignant but highly invasive spinal cord tumor.

Her stay at Bay State Medical Center was less fraught with difficulties than is perhaps typical. Her neurosurgery ward was certainly the quietest ward I've ever visited or stayed at in Bay State, a pleasant change. "Only" two mistakes-- the nurses overlooked the doctor's orders for Heparin, a blood thinner, to be administered after surgery, and the doctor forgot to write orders for the other medications my sister takes, so she went two days without. The nurse-to-patient ratio on the floor was one to six-- a bit under what we might think for a ward where virtually everyone is recovering from brain surgery.

Liz needed rehabilitation therapy, best provided at a facility other than Bay State. A caseworker from the hospital told her there was an opening in East Longmeadow, and she, fogged with pain, accepted the placement with no questions. (Perhaps a family member should be present when these decisions are made, or perhaps the case worker should have provided more information?)

I travelled by car as Liz was transported by ambulance to the East Longmeadow Skilled Nursing Center, and it didn't take twenty minutes before it was clear we were in the wrong place.

First: incredibly hot; they said the air conditioning was malfunctioning. Second: no special wing for short-term rehabilitation; my sister's roommate was a woman well advanced with Alzheimer's whose side of the incredibly tiny room was decorated with plants and photographs. In fact, the majority of the wing did seem to be filled with people who would be there until they died. There was absolutely nothing about the place that said anyone was there to get better and go home. Third: not clean! My sister had been on oxygen at Bay State and an aide brought in an ancient piece of equipment covered with dust! Liz asked for a fan, and when the fan came, it too was dust-covered. Later, Liz told me, an aide came to clean feces on the floor of the shared bathroom, and then proceeded to change her roommate's diaper without changing her gloves!

"Get me out of here," my sister said through gritted teeth. It took several hours on the telephone the next day to do it, but we did. (Wouldn't you think that a health insurance company would have a list of facilities that accept their insurance?) She's now at Heritage Hall in Agawam, and while I'm sure no such facility is perfect, the feel of the place is entirely different, with a separate wing for short-term rehabilitation. I think she can get better there.

Last night I called my older daughter, who's vacationing on the Cape, to remind her of the Perseid meteor showers.

Last night I didn't cry in my sleep, as I had the night before.

And today I have time, I hope, to do a little planning for my own vacation, which I now believe is possible.

From a falling star,
a minuscule diamond
took shape.

From a pale twilight,
amazed and moved,
I contemplate the miracle.
Dominic Diamant (Romania)
4 comments:

Being poor: call it a crime, call it a sickness, anything but what it is - Part One 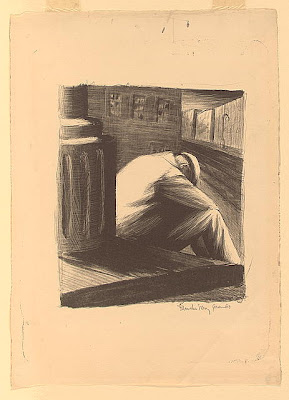 Barbara Ehrenreich has an editorial in the New York Times today about the criminalization of poverty. Much of the essay is what I've been saying publicly for some years but it can't be said often enough. I did appreciate the reminder that sometimes creditors have the court issue a summons for you to appear, which you ignore at your peril, so I'd better go pick up the certified letter from Baystate Health that the letter carrier apparently tried to deliver to me.

One paragraph in particular rang a bell. Twenty-five years ago, at the end of a very bad day, my mother called to tell me she'd been denied fuel assistance-- $8 over the annual allowed income. She was a recent widow, dying from a chronic disease, whose children still at home worked low-wage jobs, and I knew she struggled every day to pay rent and meet other basic necessities. When we hung up, words came to me that became a line of poetry, and then the next line, and the structure of a poem quickly took shape. When I finished writing that poem, I was ready to go something, ready to fight against the systems and prejudices that oppressed people, although my knowledge about these things at the time was perhaps more intuitive than intellectual. A few months later, I found the other women with whom we would form Arise for Social Justice.

Here's the paragraph and the poem.

"The pattern is to curtail financing for services that might help the poor while ramping up law enforcement: starve school and public transportation budgets, then make truancy illegal. Shut down public housing, then make it a crime to be homeless. Be sure to harass street vendors when there are few other opportunities for employment. The experience of the poor, and especially poor minorities, comes to resemble that of a rat in a cage scrambling to avoid erratically administered electric shocks."

Here’s how to drive the poor crazy;
tell us it’s not charity,
make us beg for it.
Don’t be available by phone.
Make us wait in the office
until we discover
you’re gone for the day.
Put us in lines in the cold
where we’re ashamed to complain to each other.
Close the factories, open the soup kitchens.

Tell us there’s nothing you can do.
Bury us in forms and file numbers.
Lose our paperwork.
Teach us to work in obsolete fields.
Offer us plastic for unheated apartments.
Shame our children for having bad teeth
and for wearing sneakers in January.
Underpay the parents
and give the kids free lunch.
Close the schools, open the training centers.

Make sure the checks are late,
especially before Christmas.
Refuse to cash our checks
for lack of sufficient balance.
Jack up the prices in our neighborhood.
Give us medicine
medicaid won’t pay for.
Give us vouchers
no one will accept.
Take out the pay phones.
Make the buslines end nowhere.
Raise the rents and open the shelters.

Here’s how to bring on your own downfall:
get us together in the same waiting room
once too often.
Make the size of the lie greater
so our last illusions are destroyed.
Put more of us in jail.
Keep eliminating options.
Send our children home smaller
one more time.

Look away for a moment.

Raise your consciousness and go whalewatching 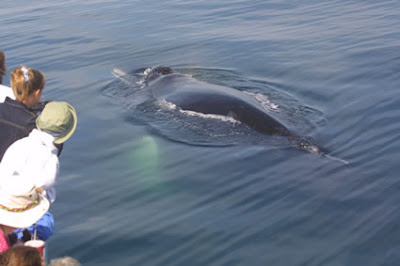 There's a wonderful article in the New York Times magazine about California whales, and how they are interacting with the humans who watch them. Might they be showing that they forgive us for centuries of killing them? If you think I'm exaggerating, check out the article, which brought tears to my eyes more than once.

You can catch a whale watch out of Boston, but my favorite tour is the Dolphin Fleet in Provincetown. The photo is from their site. Also check out the Provincetown Center for Coastal Studies, the only east coast organization authorized to free whales who become entangled in fishing nets.
No comments: