The end of large scale biomass? New regulations put on the brakes 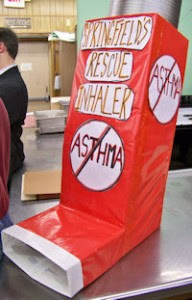 I suspect the residents of Springfield think biomass is a dead issue, but we-- Stop Toxic Incineration in Springfield--  continue to take whatever steps  necessary to keep Palmer Renewable Energy from constructing s biomass incinerator in Springfield.

We're appealing the Dept. of Environmental Protection's air permit (along with the Toxics Action Center and the Conservation Law Foundation) and preparing a defense in Land Court as a result of the Zoning Board removing the building permit issued to PRE.

But always, in the back of our minds, we've been waiting for the Dept. of Energy Resources to release its new regulations about biomass, and whether the plants proposed in Greenfield, Russell and Springfield will be eligible for the state's subsidy program, the Renewable Energy Credits.

DOER is going to require 50% efficiency to be eligible for RECs, while the proposed plants are struggling to reach even 25% efficiency-- just one of the reasons we oppose these plants.

Keep in mind, however, that Palmer Renewable Energy has said that it doesn't need RECs to operate profitably-- although I'm sure PRE wouldn't turn down the money if eligible.  So we can't let our guard down.

The state Department of Energy Resources on Friday released revisions to its regulations for how Renewable Portfolio Standards would apply to biomass generating plants.

This set of revisions, which comes almost exactly a year after draft regulations that were severely criticized as too rigid by developers of the wood-fired generators, incorporates recommendations made last June by the state Legislature’s Joint Committee on Telecommunications, Utilities, and Energy.

Mary Booth, a major critic of large-scale biomass plants, said with the new rules, the state “sorted out fact from fiction (and) sided with science, and with the people of Massachusetts.”

The proposal would apply to pending projects, including a 47-megawatt wood-fired plant planned for Greenfield by Madera Energy Inc. of Cambridge. His plant would be built in the I-91 Industrial Park.

Madera Principal Matthew Wolfe declined to comment on the latest proposal Friday, saying he was a “just sifting through” the new document. The project, he said, has been in limbo for two years pending the new rules, which set the standards for projects that are eligible for receiving green energy tax credits to help make them economically feasible.

“We’re waiting on a resolution to these regs,” said Wolfe, pointing to a public comment period that extends to June 18.

The proposed regulations come after harsh public criticism from environmental groups and a 2010 state-sponsored study by Manomet Center for Conservation Sciences that concluded the wood-fired generating plants release more heat-trapping carbon dioxide into the atmosphere per unit of energy than oil, coal, or natural gas — and that the greenhouse gases take a long time for forests to absorb.

The proposed regulations would require that wood-fired generating plants be 50 percent efficient to be eligible for one-half renewable energy credit per megawatt-hour, — slightly better than a stateof- the-art coal-fired power plant. They allow one credit per megawatt-hour for generators achieving 60 percent efficiency and include harvesting standards designed to protect forest soils.

Facilities must also have 20-year lifecycle and carbon dioxide emissions that are no greater than 50 percent the emissions from a natural gas facility.

Janet Sinclair of Buckland, who leads an antibiomass group based in Greenfield called Concerned Citizens of Franklin County, said Friday “We think burning trees for electricity is a bad idea. And I find it to be terrible public policy to reward biomass with the public’s money at 50 percent efficiency. A wood stove does better than that. Energy efficiency costs a third as much as biomass for electricity. We should put our money where it will do the most good.

“We will be reviewing the regulations carefully and commenting during the 30 day comment period.

Booth, director of the Partnership for Public Integrity, said “Massachusetts made history today,” calling the proposal “the first science-based policy in the country” and one “recognizing that high-emissions biomass power doesn’t belong in a renewable energy portfolio alongside no-emissions technologies like wind and solar power.”

All written comments on this proposed final regulation should be submitted electronically in PDF format by June 18 at 5 p.m. to doer.biomass@state.ma.us.

The state expects to have a final regulation in place this summer.

Meg Sheehan, chairwoman of the Massachusettsbased Stop Spewing Carbon campaign, called the proposal “an important step to ensuring that when trees are burned for energy, it is done in the most efficient way that also preserves our forests.” 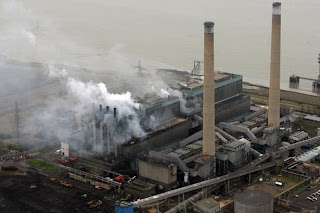 At least somebody in Great Britain gets it....

http://www.utilityproducts.com/news/2012/03/11/biomass-blaze-highlights-bizarre-nature-of-renewable-energy.html
On February 27, 120 firemen were rushed to deal with a major incident at Tilbury, east of London, where 6,000 tons of wood pellets had caught fire at what is now ''the world's largest biomass power station''. Until recently Tilbury was one of England's 14 remaining coal-fired power plants. But, attracted by the 100 per cent-plus subsidies we pay to help meet the EU target whereby within eight years, 32 per cent of our electricity must come from ''renewables'', the plant's German owners, RWE, have converted it to burning more than half a million tons of pellets a year, imported from Georgia, US, where the wood is grown and processed.
One problem is that large quantities of green wood are liable to combust, the most likely cause of this fire (the second such in Britain in recent months). Another is that wood generates energy so much less efficiently than coal that the plant's output has fallen from 1,100 megawatts to only 750MW. (However, this is still two-thirds of the power generated on average by all our 3,500 wind turbines combined.)
Rather more serious, though, since the claimed purpose of ''biomass'' is to help reduce Britain's emissions of carbon dioxide, is that the wood actually emits more CO2 for each unit of electricity it produces than the coal it replaced (not to mention all the additional CO2 emitted by processing and shipping it across the Atlantic). This recently led that bizarre body, the Committee on Climate Change, set up to advise the Government under the Climate Change Act, to recommend that biomass power stations should only be permitted to operate if they are fitted with ''carbon capture and storage'', designed to pipe away and bury all the CO2 they emit.
So, in order to reduce our CO2 emissions, we subsidise power companies to burn wood which ends up emitting much more CO2 than the fossil fuels it replaces, so that the Government is now told that this should only be allowed if the firms then remove that CO2 by a process so CO2 intensive that it doubles the cost of the electricity, in order to bury it under the sea using technology not yet commercially developed and which, according to various scientific studies, will never work anyway. Yet according to the Department of Energy and Climate Change, ''biomass'' is going to be as important to meeting our EU targets as those useless windmills. Thus in every direction do the ''green dreams'' of those who rule us in London and Brussels collide with reality.