Putting poor people to good use 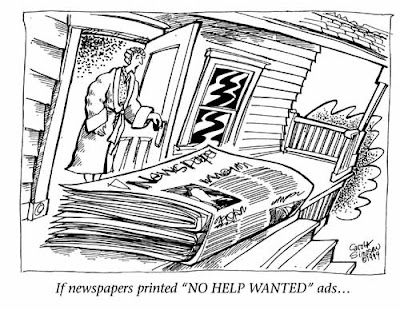 Today Liz and I went to a hearing held by the Dept. of Housing and Community Development on the new HomeBASE program, which is supposed to help eligible families avoid homelessness.  The hearing focused on the regulations themselves, and how they might be fine tuned; we were there mostly to talk about the implementation end.

To put that in human terms, when a young woman with a baby (apartment lost in the tornado, didn't know about FEMA, staying for 2 months with a friend in subsidized housing whose own housing is now at risk because of her presence) goes down to the Dept. of Transitional Assistance to apply for Emergency Assistance (necessary before you can apply for HomeBASE) and is twice told she is not eligible and turned away with no written explanation, then something is wrong with the implementation picture.  It was not until she came to Arise with her story and we gave her a flyer (thanks, Mass Law Reform) about HomeBASE, with certain key parts highlighted, and sent her back down to DTA, that she was able to get help.

The hearing today wasn't huge.  Some advocates came, and some agencies charged with administering some aspect of the program, and a couple of poor people.

One of the testifiers (this was an official hearing) is the head of a local housing agency.  Among other things, he spoke about how the housing rate is set too low, and may, through the law of unintended consequences, concentrate poverty in particular areas.  I've heard him speak about the need to have our neighborhoods economically diverse before; and while I agree with some of his analysis in theory, it's really a much more  complicated scenario.  So i thought i knew where he was going.  But I was wrong.

"Poor people should be able to live in more affluent neighborhoods," he stated, "because they need people to hire for the low wage jobs."

My mouth fell open.  I could not believe what I was hearing.  And he went on later to speak about how many homeless families are coming from out of state, and shouldn't these scarce benefits be preserved for the people on his long housing waiting list, a point nicely countered later by someone else who said that studies show a statistically insignificant difference between the needy families who come to our state and our needy families that go some somebody else's state, which also has long waiting lists., etc.

I've been pondering  his remarks all evening.  Let me get this straight: at least a few of us (not too many, mind you) should live in affluent neighborhoods so we can do their dirty work?  Can we all get hired to become maids and gardeners?  Can we wander their snowy neighborhoods with shovels?  (Actually, we do that already.) Work in the convenience  and mega-drug stores?  (We do that already, too.) And wouldn't affluent people really prefer we commute rather than live next door?

As classist, serf-like and  preposterous as his idea is, it also belongs to an era long gone, never to come again.  This isn't the Fifties. Most people's fortunes have been rolling downhill for decades. Sure, we still have a few affluent neighborhoods in Springfield, but they're ragged around the edges, and in a city where nearly thirty percent of us live below the poverty level, there just aren't enough affluent people to go around-- not here, not anywhere.

Even the HomeBASE program, rotten with good intentions and riddled with  regulations, is predicated on the belief that, starting basically from zero, a homeless family can turn its life around in just one year.Do these policy makers and administrators read the same news that I do?  Is anybody predicting the economy will recover in just one more year?

I have a lot more I could say about we what we, as poor people, need to do, but that's another post.
No comments:

Why, when people go out to vote, do they not bring the knowledge that they have about councilors' positions with them into the voting booth?


The vast majority of people in Springfield support ward representation and oppose a biomass plant being built in the city.  But four out of five of the top vote getters in the city council race oppose ward representation and support the biomass incinerator!-- Timothy Rooke, Kateri Walsh, Bud Williams and James Ferrera.
The scary thing about this, of course, is that the message councilors are likely to take from this disconnect of councilors from issues is that they can act with impunity.  Councilors should ponder, however, the first place finish of first term At Large Councilor Tom Ashe, the only at large councilor to vote to revoke the special permit for biomass developer Palmer Renewable Energy.  At 6885 votes, Ashe came in more than 900 votes of second place Tim Rooke, and a whopping 1,800 votes ahead of fifth place Jimmy Ferrera.  I think it's fair to assume that were Jose Tosado still running for city council instead of mayor, Ferrera would not have been among the top five.
While one tends to think that primary results dictate the outcome of the general election, the potential of stay-at-home voters can be tapped.  In 2008, 60% of all registered Springfield voters managed to get themselves out of the house and to the polls to vote their passion. Most candidates for office are not only unable to generate that kind of passion, most of them would prefer the blandest possible persona: lifelong residents, I graduated here, my wife works there, kids go to school here, etc. etc. Smooth, bland, and (until ward representation) colorless.  Don't let voters develop strong opinions about you.  Go along to get along. Be happy to get the votes of the folks who always vote.
I do think there are a couple of candidates this year who haven't shied away from taking strong opinions.  I know who's on my list, who's on yours?
1 comment:

Weather, climate, my cousin and I

Hurricane Irene created more damage in Western Mass and Vermont than it did on the Cape, but that's where I was-- in Wellfleet-- when the storm hit.  Although little rain fell, on Sunday we had sustained winds of 30 miles an hour and gusts up to 70 miles an hour.  But a couple of days before that, I knew Irene had been battering the Outer Banks of North Carolina, where my cousin and her partner lived. Turned out that she's OK, and her house stood, with minor damage.  Hattaras Island, however, was hit hard.

This year I've found myself tallying a lifetime of weather.  Probably my list isn't much different from other New Englanders-- flooding, blizzards, heat waves, hurricanes-- but I've experienced blizzards and floods while living alone in the woods, when I had moments of wondering if I'd make it through.  I didn't, however, ever expect to be looking at a tornado barreling up State Street straight toward me.

I hope never to know a forest fire, a major earthquake or a tsunami.  I hope New England never suffers a drought as lengthy as what Texas is experiencing.  But I have a feeling that I'll have a few more major weather events to add to my tally in the next few years.

Here's quick explanation of the relationship between weather and climate change
No comments: 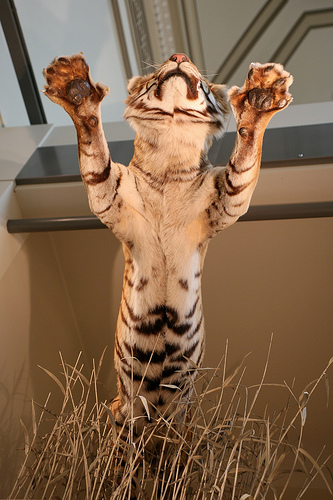 From the Animal Legal Defense Fund: (and a poem from me): While the disturbing circumstances surrounding Tony the truck stop tiger have received enormous attention, there are an estimated 5,000 -- 10,000 additional captive tigers throughout the U.S. The majority of these big cats are classified by the federal government as "generic" tigers -- tigers that are not purebred and are not in the same classification as endangered tigers in zoos (Tony, for example, is a Siberian-Bengal mix). Most of these tigers are kept as exotic "pets" and are virtually unregulated by the federal government due to a 1998 United States Fish and Wildlife Service (USFWS) rule that exempted "generic" tigers from the permit and reporting requirements that normally apply to endangered species. Due to the current lack of regulation by the federal government, there is not an accurate count of how many thousands of these tigers are living in the country, or whether they live in potentially abusive -- and dangerous -- conditions.

After years of pressure by tiger advocates, the USFWS, on August 22, published a proposed rule that would eliminate this generic tiger exemption. Should it be adopted, all tigers in the country, regardless of their lineage, would be better tracked and regulated by the federal government. People who own these tigers would be required to report annually on the number of tigers they have in captivity and on activities involving the tigers. Until this information becomes available, there is only anecdotal knowledge about the extent and whereabouts of the tiger population in this country. Such critical information could play a vital role in advancing laws that acknowledge and protect these currently "invisible" animals.

The USFWS is accepting comments on this proposed change through September 21, 2011 and your help is crucially needed! Please submit a comment in support of the proposal to eliminate the exemption for "generic" tigers today. Your support will help demonstrate to the USFWS that Americans are deeply concerned about better protections and oversight for captive tigers.

tigers pace the golden cage
(to tame is to embitter
dreaming deep of jungle days,
the reign of dapple summer.
when rarely I pursued you, man,
I smelled you as an equal.
now fiery hoop, your whip and chain
daily make you smaller.
dust rises from the circus floor;
a tiger coughs politely.
the red and empty human roar
hollows her heart and frightens.
bars are built by weaker men
(to tame evokes compassion
bones too fragile to withstand
the tigers’ jaws are clapping.
tigers have no love of pain
but know the need of killing,
whether as captor or enslaved
the tigers could be willing.
stripes of yellow, stripes of steel:
survival throws a shadow
that vigils in the tigers’ hearts
and sniffs the air for wild.
truth is water in a pool
now still and growing clear.
when tigers next leap thru the hoop
they will not reappear.
Photo from Cliff1066's photostream at Flickr.
No comments: