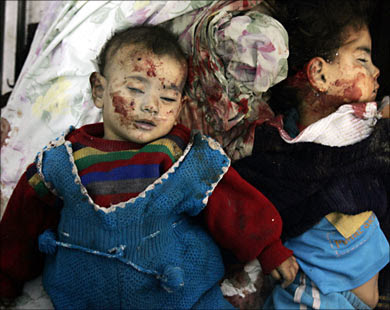 Local blogger Bill Dusty challenged info in my last post about 90% of the casualties in Gaza being non-combatants. That figure does seem wrong. I took a look online for some estimates and they follow below, and while I rarely print newspaper articles in their entirety, I must do so for an NYTimes article about the death of three of the daughters of a Palestinian doctor in Gaza.

Just remember: no CHILD voted in any Palestinian election, not for Hamas, not for anyone.

12 January 2009 – Appalled that fighting was still continuing in Gaza despite the Security Council’s ceasefire resolution, senior United Nations officials said today they were horrified at the human costs amid reports that over 40 per cent of the nearly 900 Palestinians killed in the Israeli offensive, and almost half of the 3,860 wounded, were women and children.

“Behind those statistics that we read out every day is really profound human suffering and grave tragedy for all involved and not just for those who are killed and injured but for their families as well,” UN Relief and Works Agency for Palestine Refugees in the Near East (UNRWA) Director of Operations John Ging told a news conference in New York, speaking by video link from Gaza, where he had just visited the main Al Shifa hospital.

“(It) is the place of course where you see the most horrific human consequences of this conflict. Among the tragic cases that I saw were a child, six years of age, little or no brain activity, people don’t have much hope for her survival; multiple amputee – another little girl; and a pregnant woman who’d lost a leg,” he said, as the Israeli offensive went into its 17th day with the stated aim of ending Hamas rocket attacks into Israel.

“The hospital is really full of patients whose lives have been in many instances really destroyed, and they’re alive.”

JERUSALEM/NEW YORK, 9 January 2009 - The number of children being killed and injured in the fighting in Gaza continues to climb and the humanitarian situation is becoming more desperate every day.

According to figures cited by OCHA today, there have been 758 Palestinian deaths since December 27 , out of which 257 were children and 56 were women. At least, 3,100 have been injured including 1,080 children and 452 women.

The Red Cross has accused the Israeli army of hindering its rescue teams after saying it found four children lying next to their dead mothers in the wreckage of a shell-battered Gaza City neighbourhoood.

In a scathing statement, the International Committee of the Red Cross (ICRC) accused the Israeli army of failing to meet its obligation under international humanitarian law to care for and evacuate the wounded.

The Red Cross said its rescue teams had been refused access to the Zeitun neighbourhood for four days.

TEL HASHOMER, Israel — Dr. Izzeldin Abuelaish is a Gazan and a doctor who has devoted his life to medicine and reconciliation between Israelis and Palestinians.

But on Saturday, the day after three of his daughters and a niece were killed by Israeli fire in Gaza, Dr. Abuelaish, 53, struggled to hold on to the humane philosophy that has guided his life and work.

As he sat in a waiting room of the Israeli hospital where he works part time, he asked over and over, “Why did they do this?”

Elsewhere in the hospital another daughter and a niece were being treated for their wounds.

“I dedicated my life really for peace, for medicine,” said Dr. Abuelaish, who does joint research projects with Israeli physicians and for years has worked as something of a one-man force to bring injured and ailing Gazans for treatment in Israel.

“This is the path I believed in and what I raised and educated my children to believe,” he said.

Dr. Abuelaish said he wanted the Israeli Army to tell him why his home, which he said harbored no militants, had been fired upon. He said if a mistake had been made and an errant tank shell had hit his home, he expected an apology, not excuses.

The doctor, a recent widower, had not left Gaza since the Israeli assault began last month and was at home in the Jabaliya refugee camp with his eight children and other family members during the attack on Friday.

An army spokesman said that a preliminary investigation had shown that soldiers were returning fire toward the direction of areas from which they had been fired upon.

“The Israeli Defense Forces does not target innocents or civilians, and during the operation the army has been fighting an enemy that does not hesitate to fire from within civilian targets,” said the spokesman, speaking anonymously on behalf of the army.

The Israeli public became witness to the Abuelaish family’s tragedy on Friday night when a conversation that a television journalist was having with Dr. Abuelaish was broadcast live.

In a video now available on YouTube, the doctor implored the journalist, whom he had called, to help send assistance, wailing, “My daughters have been killed.”

Journalists had come to know the doctor, who was already well known in the country’s medical establishment, because he has been providing witness accounts of the Israeli operation for television stations. After the broadcast, an ambulance was sent to a border crossing to pick up the doctor and the two wounded girls. His four other children remain in Gaza and are expected to join him in Israel soon.

At the Chaim Sheba Medical Center at Tel Hashomer on Saturday, Dr. Abuelaish was surrounded by Israeli colleagues. Several were crying. Tammie Ronen, a professor of social work at Tel Aviv University, knelt beside the doctor. “You cannot let yourself collapse, you have your living children to take care of,” said Dr. Ronen. Dr. Ronen had worked with him in researching the effects of conflict-related stress on Palestinian children in Gaza and Israeli children in Sderot, a border town that has been the main target of Gazan rocket fire in recent years.

“Tell them who my children were,” said Dr. Abuelaish, spotting Anael Harpaz, an Israeli woman who runs a peace camp in New Mexico for Israeli and Palestinian girls that three of his daughters attended, including his eldest, Bisan, 20, who was killed Friday. The other two daughters who were killed were Mayar, 15, and Aya, 13. The doctor’s niece who died, Nur Abuelaish, was 17.

Dr. Abuelaish recalled that it was Bisan who, after her mother died of leukemia, urged him to continue his work in Israel, saying she would look after the younger children.

In a hospital room, Ms. Harpaz held 17-year-old Shada Abuelaish’s hand as a nurse placed drops of medicine on her tongue. The girl’s forehead was covered in bandages as was her right eye, which had been operated on in hopes of saving it. The niece who was wounded is in critical condition, with shrapnel wounds.

Outside the room, Ms. Harpaz crumpled into a chair, sobbing.

“I hope this is a wake-up call,” she said. “This is such a peace-loving family.”

Dr. Abuelaish is a rarity: a Gazan at home among Israelis. He describes himself as a bridge between the two worlds, one of the few Gazans with a permit to enter Israel because of his work.

“I wanted every Palestinian treated in Israel to go back and say how well the Israelis treated them,” he said. “That is the message I wanted to spread all the time. And this is what I get in return?”

Later, sitting on a plastic chair near his daughter’s hospital room, Dr. Abuelaish spoke with the prayer of so many parents who have buried their children as part of Israeli-Palestinian conflict. “I hope that my children will be the last price.”

You're right, Michaelann, children didn't vote for Hamas. But their parents did. Sometimes kids pay a terrible price for the choices their parents make. Just ask the folks who voted for Adolf Hitler.

The conlfict between Palestinians and Israelis will not end until the Palestinians decide it is time for peace. Stop voting in militants who want to destroy Israel. Stop beating your chests and strapping bombs to your children and have them run into markets.

This war could be over tomorrow if the Palestinians would just put down their rockets, mortars and rifles and devote their lives to *peace*.

Peace takes two willing parties in order to happen. You can't just shake your finger at one of them while the other sits back and re-arms.

And that's all I got to say about that stuff. Somebody pass me a beer!

Bill, I think you are a bit out of touch with what progressives think about this conflict. I myself have only ever met one person who thinks suicide bombers are heroes, and I know many people who cringe at Hamas' actions even as they know that BOTH sides broke the ceasefire agreement that led to the current hostilities.