Don't let Bush and his pals get off easy 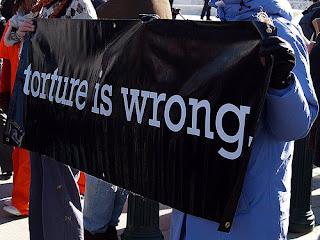 Do you think Bush and his co-conspirators should be able to steal away quietly, write books, get jobs with major corporations, and otherwise profit from their illegal actions?

I don't. It makes no sense to me that we should allow our chief elected and appointed officials to commit mayhem and then just move on as if nothing has happened. It's a kind of insanity. They should be held accountable for their actions, which damaged civil liberties, killed thousands of innocents, hurt the U.S. reputation-- but there's one word that haunts me the most:

There's a petition up at the Care2 Petition Site calling on the new Attorney General to appoint a Special Prosecutor to investigate war crimes. Here's the text of the letter, and if you want to sign, go to the Petition Site.

We the undersigned citizens of the United States petition you to appoint a Special Prosecutor to investigate and prosecute any and all government officials who have participated in torture and other war crimes.

In the final days of their administration, President Bush and Vice
President Cheney admitted they authorized "enhanced interrogation" of prisoners, specifically including waterboarding. But "enhanced
interrogation" is simply a euphemism for torture, which was so severe that it caused the deaths of at least 70 prisoners.

As Major General Antonio Taguba, the Army general who led the investigation into prisoner abuse at Iraq's Abu Ghraib prison has stated:

"After years of disclosures by government investigations, media accounts and reports from human rights organizations, there is no longer any doubt as to whether the current administration has committed war crimes. The only question that remains to be answered is whether those who ordered the use of torture will be held to account."

The United States is a representative democracy. The actions of our
government officials are done in the name of its citizens. We are outraged that torture been committed in our name. We urge you to appoint a Special Prosecutor to prosecute those responsible for torture to the fullest extent of the law.

start with rove's subpoena, then get him in jail (where his fat, bald, tubby ass will be sold for cig's) until he's weeping, then get his testimony against Cheney and Dub.

PUT THEM ALL IN FEDERAL (read: assrape) PRISON FOR A LONG TIME. War crimes, racism & crimes against the environment are only the start - they have LOTS to answer for.