The Joy of Baystate 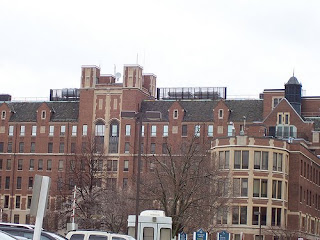 I have a very dear friend who's been at Baystate Medical Center since the week before Christmas after taking a tumble down some stairs.  He has some underlying  health conditions and since entering Baystate he's been in a downward spiral.

Last Wednesday, when I called his room to speak to him, I was told he was in the emergency room!  Apparently Baystate had attempted to transfer him to Wingate nursing home for rehabilitative therapy, but Wingate sent him back because he hadn't moved his bowels in the six days he'd been hospitalized and they said they couldn't deal with it.  By telling the patient advocate I reached by phone that my friend had been inappropriately transfered to Wingate and I wanted to find out what was happening with him (and making sure the patient advocate checked with my friend to make sure I could have access to information),  I managed to get a callback from the head of the emergency room saying, No, he was inappropriately refused by Wingate, and that he'd spoken to  the administrator there and my friend was going to be sent back-- as soon as an ambulance was available, an unpredictable number of hours away.

Shortly after, apparently the Baystate doctors changed their minds and decided they should deal with my friend's situation in-house.  Of course his room had been given away, and he spent a miserable day in the emergency room before he could be re-admitted. After two fruitless days of enemas, laxatives and a colonoscopy, they determined that he had a bowel perforation.  (Before the treatments?  Because of the treatments?) He had emergency surgery Christmas Eve and has been fighting for his life ever since.

I hadn't meant to write all this, but it's the context for a minor thing, a very minor thing, that pushed me over the edge to anger today-- even though I didn't show it.

I went to visit my friend and found him in restraints because he's been having terrible hallucinations (the medication, the nurse told me) and had tried to remove his central line and colostomy bag.  (He's not terribly aware of what's been happening to him, but told me he hallucinated he'd been mutilated-- not far from the truth.)

Next to his bed is a dry erase board where the names of the nurse and assistants for the day are written down.  Near the bottom is the line "Expected Discharge Date" and someone had written "Not soon enough."  I called it to his nurse's attention, and we realized it was written in pen, probably by a former patient.  But I asked her to find a way to remove it lest my friend, who was constantly apologizing for any trouble he was causing,  see it and think it was directed toward him.

I know myself well enough to know that some of my anger toward Baystate, not just for my friend but also for my sister's and  my own experiences, (and I didn't write the half of it) is misdirected fear.  But why does it seem so impossible to Baystate to provide excellent medical care, excellent nursing, great supportive services and a dignified setting all at the same time?  At least one element and sometimes more has been missing every time.

Keep my friend in your prayers.

As a registered nurse I'd like to apologize for the poor care you write about in this and other posts.

One thing that we can do about this situation is to lend our support to the Massachusetts Nurses Association's efforts to unionize Baystate's Springfield campus.

I can't tell you what a difference it makes in a hospital when the nurses (mostly women) have a strong voice that they can use to dialog with the (mostly male) corporate structure.

Baystate's Greenfield campus (Franklin Medical Center) is owned and run by the same company, but because of having union nurses, and on-site executives who work with the union nurses, the culture, care and spirit of the place is of a very high quality.

I have belonged to a union for 35 years. They have protected us to where we are today but now they are over protective. RN's do almost nothing, Docs all interns and over worked. Personal care physicans are not allowed on floor or even in hospital. Good thing for the constant companion program when they show up. BMC has gotten out of control due to specialists and apathy due to budget cuts in the wrong places.'Needs to be fixed soon or we all will die there...