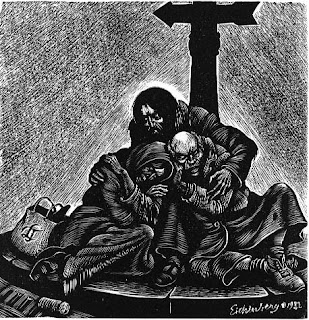 Couldn't they have timed this for Christmas Day?

On December 1, new regulations by the Massachusetts boards of Building Regulations and Fire Prevention Regulations decreed that houses of worship could not shelter the homeless for more than seven consecutive days, and for no more than 35 days total between September 15 and June 15.  They must now also apply for an occupancy permit and then have inspections by the building, fire and health departments.

Other new regulations affecting churches that shelter (or are considering sheltering) homeless people, such as the necessity for smoke and carbon monoxide alarms and for an occupancy plan that clearly details aisles and exits, are only common sense and are already in place in most churches.

But what is to happen when a cold snap hits and the shelters are full? And what if the cold snap is longer than seven days?   Are churches-- and homeless people-- really to wait through the often-lengthy occupancy permit process?  Are churches to turn away the homeless on the 8th day?

Some churches said they've already been turning away from directly housing the homeless, focusing instead on working in coalition with more traditional institutions and on prevention and  permanent solutions.  All of that is to the good, but need it be an either/or situation?

Springfield, Massachusetts' Warming Place shelter, when it was operating, rotated each night to a different house of worship; more than two dozen parishes and congregations participated at the program's peak.  Later the program settled down at the old York St. jail. I worked at the Warming Place in its first incarnation and found myself deeply spiritually moved by the generosity and kindness I saw toward the homeless.

Later, however, when assisting the homeless with shelter became fraught with political tension, many houses of worship fell away from this sense of mission rather than feel uncomfortable with those in power.  Others have gone on to play different, significant roles in helping the homeless; some have fallen silent.

Will churches be able to follow their conscience if it contradicts a state regulation?

The Rev. Gregory S. Dyson, pastor of Church in the Acres in Springfield, said churches that would provide shelter for the homeless are not waiting for anyone’s permission and are low-key in their approach. “They’re sleeping one or two or three people, so it doesn’t become an issue,” he said. Springfield Republican.
Rev. Dyson leads up street outreach and is also looking for more permanent solutions.  Yet in these economic times, with more and more people becoming homeless,  why create restrictions now on emergency solutions?
What does it mean to build an institution around Christ and yet forget these words?

This is crazy. We need to be helping the homeless, not adding to their woes. Every time the state comes up with a new regulation that restricts how people can help the homeless, I wonder why are they doing this? Why can't they pass regulations that will help house more of the homeless?

Now even more people will freeze to death unless the churches have the guts to defy this...