Tony Bellamy: Come and Get Your Love 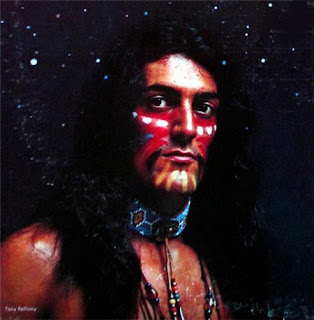 Redbone's lead guitarist Tony Bellamy passed away on Christmas Day at the age of 69.  I'm sitting here listening to one of my favorite songs of all time,  "Come and Get Your Love", with a smile on my face and tears in my eyes. The embedding  has been disabled, but you need to go and listen to this song right now at
YouTube.
The following press release is from the Native American Music Awards, a wonderful site where you can hear that Native American music is alive and well.


New York, NY – The Native American Music Awards (N.A.M.A.) organization is deeply saddened to learn of the passing of Redbone's Anthony Bellamy, who has died on Christmas morning, December 25th, 2009 in Las Vegas, Nevada with his family by his side. Anthony, or Tony "T-Bone" Bellamy, who attended the 10th Annual Native American Music Awards and was inducted into the N.A.M.A. Hall of Fame with Redbone in 2008, was a Mexican-American Yaqui Indian who became the lead guitarist, pianist and vocalist for the Native American band.. He was a beloved and endearing friend of the "Nammys" since its inception, and will be greatly missed.

Redbone became established as a Native American rock group in the 1970s. They reached the Top 5 on the Billboard Hot 100 charts in 1974 with the hit song, "Come and Get Your Love."

Originally formed in 1969 in Los Angeles, California by brothers Patrick Vasquez (bass and vocals) and Lolly Vasquez (guitar and vocals), the name Redbone started as a joking reference to a Cajun term for a mixed-race person ("half-breed"). The band's members were of mixed blood ancestry.  According to Patrick Vasquez aka Pat Vegas, it was Jimi Hendrix who talked the musicians into forming an all-Native American rock group . The band consisted of Patrick Vasquez, Lolly Vasquez, drummer Pete DePoe and Anthony "Tony" Bellamy.

The group signed to Epic Records in 1969, and released their debut album, Redbone, in 1970. The follow-up album, Potlatch, featured the song "Alcatraz," which dealt with the 1969 occupation of Alcatraz Island. Their first commercially successful singles were, “Maggie,” and "Witch Queen of New Orleans" (1971) which also became a huge hit in the United Kingdom. In 1973, Redbone released the political, "We Were All Wounded at Wounded Knee” which reached the #1 chart position in Europe.

By 1974, Redbone had reached the Top 5 of the Billboard Hot 100 charts with "Come and Get Your Love”. The Pop/Funk/Disco song was certified Gold by the R.I.A.A for selling over one million copies and is still heard today on radio stations and commercials throughout the country. Drummer DePoe was replaced by Arturo Perez on Already Here (1972). Perez was replaced on Wovoka (1974) by Butch Rillera. (Wovoka contained the band's most successful single, "Come and Get Your Love,") In 1998 members of the group appeared as special guest performers at the inaugural Native American Music Awards and returned in 2008 as NAMA Hall of Fame inductees..

Tony Bellamy grew up in a family of dancers and musicians and learned to play the flamenco guitar as part of his musical education. Before joining the band Redbone, Tony Bellamy had performed with Dobie Gray, and a was a member of the San Francisco band, Peter and the Wolves, that evolved into the psychedelic band Moby Grape.

N.A.M.A. and its Advisory Board contingency would like extend their condolences to the Bellamy family. N.A.M.A. will forever honor this legendary performer who has been both a leading force in the mainstream music industry and an inspiration to the Native American community.