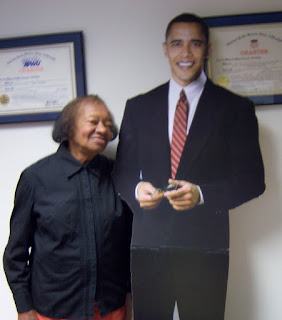 Lizzie Jenkins, who's been a senior aide with both Arise and Mass. Senior Action, has passed away.  When she didn't come in to work yesterday and today, Arise members were alarmed enough to go to her house and call the police.  Apparently she passed away in her sleep on an unknown day, because Arise was closed on Thursday for Thanksgiving and her taking Friday off was not considered unusual.

Last week, when I saw her for the last time (but didn't know it), she told me she'd just finished taking a computer course!  She made sweet potato pies for my house and Liz's house and gave them to us on Tuesday.  I was planning to give her this picture for Christmas and of course now I'm sorry I waited.

Miss Lizzie just loved Mrs. Clinton, as she called Hilary, and really wanted her to become President, but after Barak Obama won the nomination, it wasn't difficult for her to switch her allegiance.

I will miss her.  The Senior Aide program likes to move people to a new agency after one year, but we just kept shifting her from Arise, to AFSC, to Mass Senior Action and back again so we could keep her.  Now we will have to keep her in our hearts.

Never heard of Miss Lizzie Jenkins!
Although use Google transducer can we tell that Miss Lizzie was a very good person.
Dumneavastra have a warm heart and publish these articles if beautiful!
We send you a hi and with great pleasure!

Thank you for posting such a nice tribute to Miss
Lizzie. I have met her before.

It is such a sweet image of her kindness while baking sweet potato pies and delivering them to those she cared about.

Sorry to know that she was lonely in death, however, she leaves many with fond memories of her.