Human Rights Day - what does it mean? 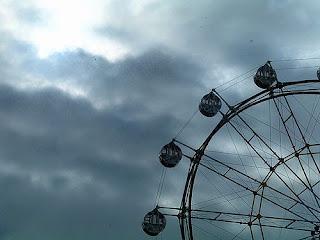 Sixty one years ago today, the United Nations General Assembly adopted the Universal Declaration of Human Rights, the first global declaration of human rights ever made.  The United States has only ratified three of the nine core human right treaties stemming from the Declaration,  which doesn't mean as much as it might seem, seeing as many of the signatories were then and still continue to be major violators of human rights.  But the U.S. is where I've lived all my life, and is truly the only place in the world where I understand what I see and where my life might make a difference.

Tonight I was sitting in my car, drinking coffee and waiting for a building to open its doors for a meeting.  It was finally cold outside, almost a relief, with the inch of snow from yesterday still crisp on the ground.  Across the street, I watched people leave the local market singly and in small groups, carrying white plastic bags filled with food.  Heads down, they were walking toward home.

Most of them were not dressed very warmly.  Maybe they'd been caught unawares of the weather.  But at least they had food to carry.  Whether that food was nourishing or enough was a different question.

Of the people passing, I knew that some were just leaving work and stopping at the market on the way home.  Some were receiving public assistance.  The very old woman who walked by was eligible for Social Security.  Given I was in a poor neighborhood, a majority probably paid for a portion of their purchase with food stamps.   Most but not all were people of color.

There are days when I really celebrate the life force that shines through in people, who get by somehow or other and find joy in being alive despite all adversity. On others days I see how adversity slowly wears away the human spirit and narrows  the window of hope  to a distant sliver of light.

I believe that everyone has a use and a talent,  and that poverty is like a cloud without moisture that hangs over the seeds of our becoming.  Without food, shelter, clothing, meaningful work, health care, education and civil liberties, we cannot fully become ourselves and we cannot create a truly healthy community.  But even so...we survive.

Whereas recognition of the inherent dignity and of the equal and inalienable rights of all members of the human family is the foundation of freedom, justice and peace in the world,


Whereas disregard and contempt for human rights have resulted in barbarous acts which have outraged the conscience of mankind, and the advent of a world in which human beings shall enjoy freedom of speech and belief and freedom from fear and want has been proclaimed as the highest aspiration of the common people,


Whereas it is essential, if man is not to be compelled to have recourse, as a last resort, to rebellion against tyranny and oppression, that human rights should be protected by the rule of law,


Whereas it is essential to promote the development of friendly relations between nations,


Whereas the peoples of the United Nations have in the Charter reaffirmed their faith in fundamental human rights, in the dignity and worth of the human person and in the equal rights of men and women and have determined to promote social progress and better standards of life in larger freedom,


Whereas Member States have pledged themselves to achieve, in co-operation with the United Nations, the promotion of universal respect for and observance of human rights and fundamental freedoms,


Whereas a common understanding of these rights and freedoms is of the greatest importance for the full realization of this pledge,

Now, Therefore THE GENERAL ASSEMBLY proclaims THIS UNIVERSAL DECLARATION OF HUMAN RIGHTSas a common standard of achievement for all peoples and all nations, to the end that every individual and every organ of society, keeping this Declaration constantly in mind, shall strive by teaching and education to promote respect for these rights and freedoms and by progressive measures, national and international, to secure their universal and effective recognition and observance, both among the peoples of Member States themselves and among the peoples of territories under their jurisdiction.