Battling with bears while smothered by lithium

Yesterday when I went to visit my friend in the hospital, he had a new roommate-- a young, nice looking Puerto Rican man-- a boy, really.  His illness was not apparent but he seemed low-spirited.  Another addition to the setting was an aide who never left the room all the time I was there. 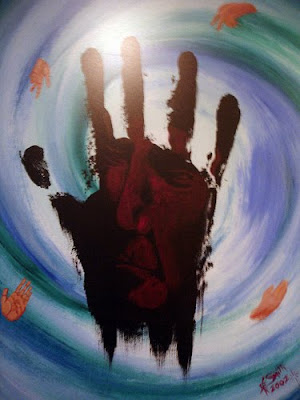 A few minutes after I arrived,  a young woman with earrings, high heels and a clipboard joined us and started  talking to the boy.

"HI!' she said in a chipper voice.  "I'm Jackie from Psych Services."

I tried not to listen but some words drifted over....Well, the doctors want to make sure you're not going to try to hurt yourself again......Now, what else do you take besides the lithium?

I told my friend I was going to get a coffee from the cafeteria and I'd be back.

Today when I visited my friend, I greeted the young man as well.  We had a different aide, a little chattier, who was trying to get him to order from the menu.

"I'm really not hungry," he said.  "If I was really trying to kill myself, I'd eat this food." He laughed.

I wondered if anybody in the psychiatric field had ever spent any time talking to this young man, or was it all drugs, drugs, drugs?   If I knew instantly he was talking about fighting his own demons, finding his own courage and, yes, risking his own life to do it, how could a more skilled  person have used this knowledge to engage him?

Recently the New York Times reported on a government study indicating that children receiving Medicaid-- that is, poor children-- were prescribed powerful anti-psychotic drugs at four times the rate of children who were privately insured.  Of course, it's cheaper for Medicaid to provide drugs than long-term therapy, although given the serious and sometime life-long side effects these drugs cause, it may be a penny-wise, pound-foolish steategy.  One doctor interviewed in the article suggested poverty may cause more mental illness.  Another doctor suggested that children on Medicaid are more likely to receive needed treatment because of higher out-of-pocket expenses than the privately insured.  If we accept that, then we have have to accept that it is appropriate for nearly five percent of all of our children to be medicated.

I've seen this push to medicate children for more than two decades.  I've talked to many mothers who have been told by their child's school administrators that they had to place their child on medication in order for the child to stay in school.  Some mothers fight it and some give in with relief.  Their children get fat, and dopey, and are even more likely to have trouble making friends if they had that trouble before.  Some parents actively seek to get their kids medicated, because they've been taught to believe unreservedly in the magic of pills and  they just don't know what else to do.

Does poverty create mental stress for families and children ?  Damn right!  If you're a kid and you know that you might have to move for the third time in two years because your folks are behind in the rent, you're affected.  If you have to sleep on the couch at night because your apartment is short a bedroom, you're affected.  If there's no quiet place to do homework and your grades start going down, you're affected.  The life around you and eventually your own life may be riddled with economic, emotional and intellectual malnutrition.  You may be tangled like a fly in a spiderweb with myriad institutions meant to help or punish you.  You might actually be in need of counseling and guidance and maybe, just maybe, some medication.  Or you might be just fine.

By pathologizing poverty, society lets itself off the hook.  Why tackle the structural issues when anti-psychotics, prison, addiction, family services and television can accomplish so much?

Tonight, belatedly, whoever is in charge decided the young man deserved some privacy and my friend was moved to a room two doors down.  Will he actually be better off alone?  I don't know.  I'm a bit uncomfortable myself that I'm invading his privacy by telling his story so that I can tell this larger story.  But I wish him well.