Homeless Memorial Day: remember the living as well as the dead 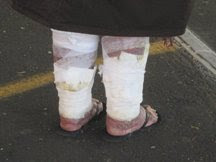 Tonight is the longest night of the year; today more than 100 cities in the U.S. and Canada are commemorating the deaths of people who died in 2009 without a home to call their own.

If you examine homelessness deeply, you can learn to understand everything that needs to change in our country and our world.  Today, however, we can think of the individuals who have suffered, and we can think about the individual acts of kindness that can make a difference.

Most people think of warm summer vacations when they think of Hyannis, Massachusetts but tonight at 6 pm., candles will be lit for a service at the Federated Church for the nine homeless people in the Hyannis area who have died this year.  People in Hartford, Connecticut will be gathering at 5 pm. to read the names of the dead. Springfield, Massachusetts' service took place at 1 pm. today.

Remember the living:
Annie Gafney in Colorado Springs posted an ad on Craigslist, saying she wanted to spend her birthday distributing hats and gloves to the homeless at an area tent city, and dozens responded with offers of help.    The Help Portrait movement's chapter in Denver, Colorado treated homeless people to a haircut and   shave or makeup session, and then took their pictures that people can share with family who may be far away-- a real boost to people's self-esteem.   Nichola Prested, founder of Wardrobe Refashion, organized a sewing bee to make warm clothing items for an area shelter.


Remember the dead:
Richard Casper, only 44 years old, was found dead in a field in Macon, Georgia  last week.  The coroner said he died of "natural causes."  A homeless woman in Hoboken, New Jersey passed away recently and the  Hudson Reporter has printed a tribute and apology from a community woman who knew her and felt like the community hadn't done enough to help.  Many of the homeless people who've died this year will die alone.

Remember the living: 13 year old Andrew Mitchell was paralyzed in a drive-by shooting  seven years ago, but that's not stopping him from  collecting 100 sleeping bags and a hundred dufflebags filled with toiletries for a local tent city.   11 year old Casey Rogers in Dallas founded a charity for homeless people three years ago after seeing a homeless man rebuffed while asking for spare change.   A formerly homeless man is walking across Canada from the west to the east coast with his dog to raise awareness about homelessness.

I ask those of you who are fortunate enough to have a home this year to be kind.  What can you do to help a homeless person?

“There are certain things that are fundamental to human fulfillment. The essence of these needs is captured in the phrase 'to live, to love, to learn, to leave a legacy'. The need to live is our physical need for such things as food, clothing, shelter, economical well-being, health. The need to love is our social need to relate to other people, to belong, to love and to be loved. The need to learn is our mental need to develop and to grow. And the need to leave a legacy is our spiritual need to have a sense of meaning, purpose, personal congruence, and contribution”
-- Stephen R. Covey

Photo of Maria from  the Hudson Reporter.

An Alternative to Capitalism (which will end homelessness)

The following link takes you to an essay titled: "Home of the Brave?" which I wrote and appeared in the Athenaeum Library of Philosophy: