"Biomass" incinerators: where we stand right now in Springfield and Western Mass 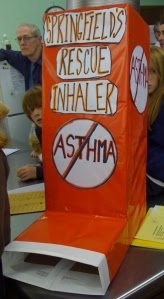 I've been flat out the last three weeks organizing against the proposed "biomass" incinerator being planned for Springfield by Palmer Renewable Energy with not even any time to blog.  Fortunately, other bloggers have stepped up and covered recent events, so I'm going to give a quick overview of what's been happening, link to those stories, and try to give an idea of where we opponents of the incinerator, who call ourselves Stop Toxic Incineration in Springfield,  need to go now.  For a refresher in why I and so many other oppose this plant, see this post.

On November 18, at our request, the Springfield Public Health Council turned the entirety of its regular meeting over to testimony from opponents as to why PRE's proposal is a threat to our community's health. Even though we'd done a lot of outreach for this meeting, I was still astounded to see more than a hundred people, the majority of whom I didn't recognize, come out to learn more.  The Springfield Institute videotaped much of the hearing, including a power point presentation by Mass. Environmental Energy Alliance's Mary Booth, and has links to much of the written testimony that was submitted both to the Public Health Council and also to the Department of Environmental Protection (DEP), as it was the last day to submit written comment of PRE's Beneficial Use Determination permit.  Springfield Intruder's Bill Dusty also attended this hearing and his post covers some of the history of the forward movement of this plant.

The Public Health Council had already told us that they wanted to hear both sides of the story, and would be hearing from PRE developers on December 1.  Some of our members made that meeting, but most of us were focused on the December 2 air permitting hearing that DEP was having the next day at Kennedy Middle School.  The deadline for submitting comments was, at that time, Friday, December 4.

I met briefly with Vic Gatto, PRE's founder and chief operating officer, on December 1.  I wanted to know if PRE was willing to do a Health Impact Assessment, as called for by the Mass. Department of Public Health, before moving ahead.  Mr. Gatto indicated some willingness to underwrite the study, but suggested Epsilon Associates (the business that did such a poor job of outreach for the plant) and said he was NOT willing to subject himself to the regulations of another state agency, meaning DPH.  I left that meeting feeling that if PRE chose the company to do the health impact assessment, the assessment would be meaningless. 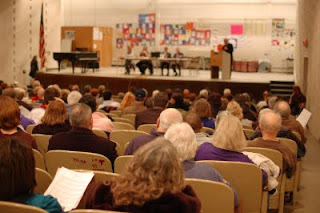 At the December 2 air permitting hearing, I found myself once again astounded by the turnout of area residents.  Some 300 people packed the school's auditorium!  The developers were included among that 300, but oddly, no one from PRE spoke in the plant's defense (no one spoke on behalf of the plant at all).  I must say that that concerned me-- did the developers feel their testimony was unnecessary in order for them to receive their needed permits?  So many people had such excellent comments that I won't even give a sampling, but my ears did perk up when Tim Allen, city councilor-elect and chair of the Springfield Public Health Council, said that the council would be making a decision about the testimony it's taken next week.  Blogger Tony Mateus has covered the hearing very well in his post at In The Valley.

At the hearing,  DEP announced that they had extended the comment period for the air permit until December 18.  This is important.  Anyone who wants to submit comments can still do so by emailing marc.simpson@state.ma.us.(although on DEP's website, the deadline is still listed at the 4th).

The next day, Thursday, December 5, I called Dave Howland at DEP and was told the very good news that permits for Palmer Renewable Energy were on hold!  Apparently enough questions have been raised about the possible health effects of PRE on our community that DEP wants to see them answered, and believes there needs to be a thorough study.  I expressed some concern that PRE would choose a consultant that was already on their side.  Mr. Howland said he thought thet DEP and PRE needed to take their sense of direction from the Mass. Department of Public Health.  Although DPH would not be the ones doing the study, they certainly know who is qualified to do so.  When I asked how long the permits would be on hold, Mr. Howland said several months at least, "unless PRE is a miracle worker"  and finds a way to answer DEP's questions very quickly.

Also on that same day, The Springfield Republican announced that 5 proposed ballot questions were likely to appear on the ballot next November.  One of those questions, by the organization Stop Spewing Carbon, would set the bar for carbon emissions low enough that biomass plants could not be considered renewable and would therefore not be eligible for Renewable Energy Certificates, making it unfeasible for many of these proposed plants to operate.

What I find very interesting is that on the day before the ballot question announcement, the Mass. Department of Energy Resources let biomass energy stakeholders and the general public know that all applications for these Renewable Energy Certificates were on hold until  a study being done by the Manomet Center for Conservation Sciences, which was commissioned by DOER to study the sustainability of biomass incinerators in Massachusetts, could be completed and evaluated.  Now, we can put this into the "Let's head them off at the pass and defuse the opposition" category or the "great minds think alike" category, but it doesn't really matter, because it's a good thing that the state is asking itself these questions.

BUT HERE'S WHAT'S ABSOLUTELY INFURIATING: When the Springfield Republican's reporter Stan Freeman covered this story, he said that it was a moratorium on biomass!  That is completely incorrect!  His first paragraph:  "The state has formally suspended consideration of any applications to build new biomass plants, including proposals for Springfield, Russell and Greenfield, pending a study of whether energy from the power plants is truly renewable." is wrong, wrong, wrong!  Only the Renewable Energy Certificates have been suspended, and only for the length of time needed to complete and evaluate Manomet's study.  Biomass incinerators are free to continue seeking and obtaining local and state permits for their projects, and if they don't need Renewable Energy Certificates (which are financial incentives) to operate, then this suspension of RECs won't affect them at all.  Palmer hasn't even applied for them.  Mary Serreze at Northampton Media gives a good overview of DOER's announcement.

I'm hoping Stan Freeman will see fit to correct this story.  Meanwhile, I have to give a shout-out here for the local weeklies, the Springfield Reminder, Chicopee Register and Ludlow Register.   These papers have really helped get the word out to area residents about PRE's incinerator.  (The Valley Advocate has been completely missing in action and hasn't returned my phone call about why.)

Stop Toxic Incineration in Springfield is meeting again this Tuesday to figure out our next steps.  I'm hoping we'll feel as if we can proceed at a somewhat less hectic pace through December, but we'll see.

Photos from the Springfield Institute and In The Valley.

"Never doubt that a small group of thoughtful, committed citizens can change the world. Indeed, it is the only thing that ever has."
--Margaret Mead, anthropologist.

Thank you and your team for all of the work that you are doing.