A world without trucks 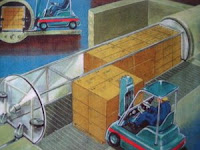 My brother-in-law is a truck driver, and I don't think there's ever a truck accident anywhere that I don't think of him and wonder where he is.

A terrible tanker truck accident on Route 91 in Chicopee, MAon Friday morning claimed the life of New Hampshire driver Aaron Staelens. The accident wasn't his fault-- in fact, my sister thinks if he had swerved left instead of right, the truck might not have hit a guard rail and exploded. But swerving left would have brought him into the line of more traffic, where more people's lives would have been at risk. Most truck drivers have that instinct-- to avoid passenger cars even when it puts the driver in more danger.

Truck drivers have a difficult life and with the rising cost of diesel fuel, jobs are at risk, especially for independent truckers. There's discussion of a truckers' strike early in April, though what that might accomplish is unclear.

What is the future of trucking? Some European countries are re-examining the idea of transporting goods underground. If it can be done for water, sewage, gas and oil, why not for other products?

Low-Tech magazine describes how it would work. "The most viable techniques, however, adopt just the concept of automated underground transport: they make use of well-known electric propulsion instead of compressed air or electromagnetic forces, and they envision extreme low speeds of 7 to 35 kilometres per hour (4 to 22 mph). In fact, they mix the concept of pneumatic transport with that of an automated subway line or a conveyor belt."

Check it out to see how at least some of our transport problems could be solved in a cheaper, more environmentally sound way than overland delivery by truck.

This is an issue effecting all of us and we MUST take a stand NOW. Our government IS a major contributing factor in the outrageous price of fuel...we must take this action to get their attention. All other avenues has only fallen on deaf ears - our government is ignoring the will, and needs, of the American people.

Thanks for the info! Any way I can support, I will.