Across the universe in a previously unknown galaxy 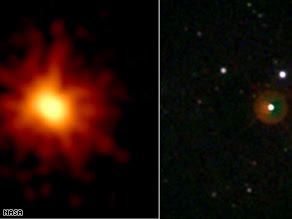 7.5 billion light years ago, a star 40 times the size of our sun exploded. On Wednesday, March 19, the light from that explosion reached the earth, becoming the farthest away object to be visible to the naked eye from our planet.

How far away was this sun? Well, one light year equals 5.9 trillion miles. Multiply that by 7.5 billion light years, and you have an explosion that came from halfway to the edge of the universe from our galaxy..

How big is the universe? Scientists have calculated it as slightly larger than 156 billion light years.

How old is the universe? Given the time scale involved, scientists have calculated rather closely-- 13.73 billion years old.

How can the universe be "only" 13.73 billion years old yet be 173 billion light years wide? Because ever since the birth of the universe, the universe has been expanding, and the expansion is proceeding at an accelerated rate.

However, it's not the galaxies themselves are travelling away from each -- it's the space in between the galaxies that's expanding. The farther away a galaxy is from our own, the faster it is receding. Picture an uninflated balloon and draw a series of dots evenly spaced on the surface. Then blow up the balloon. It is the space between the dots that expands. If your galaxy is two dots away from ours, we will recede from your view at twice the rate as the galaxy only one dot away.

(Space expanding at an ever-increasing rate is what scientists are now calling "dark energy," a sort of anti-gravity pushing the galaxies apart.)

For reasons too complex to explain here, nothing in the theory of general relativity prohibits the space between galaxies expanding at faster than the speed of light. Eventually those galaxies will be moving away from us so fast that their light can never reach us.

The amount of knowledge we have about the universe is astounding given that no human has ever been farther than 250,000 miles from earth and no spacecraft has yet left the solar system. With our knowledge we can look at the nighttime sky and savor the fact that those who come after us may know more about the universe, but they can never see more of it than we do right now.