If bats are in trouble, so are we 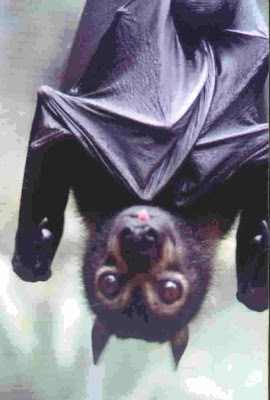 They can live for twenty-five years and only have one baby every twelve months. They eat insects that plague humans and they help to pollinate plants. And 90% of them may have died in some places in New England this winter.

Little brown bats, Northern long-eared, Eastern pipistrelle, and the federally endangered Indiana bat are being stricken by a disease biologists are naming White Nose Syndrome, although whether it's a virus, a bacteria or a fungus is not yet clear. These species are the first infected, but biologists fear that all species of bats are vulnerable.

Sick bats were first discovered only a little more than a year ago in a cave near Albany, New York. In one cave, the population of bats plummeted from 1,300 to 38. By February, sick bats had also been found in Vermont and Massachusetts. By the middle of the month, the Boston Globe reported infected bats had been found in two caves in Western Massachusetts near Chester.

"No one has a clue what is going on," said Tom French, assistant director of the natural heritage and endangered species program of the Massachusetts Division of Fish and Wildlife, who helped find sick bats in Massachusetts."

Caves where sick bats are found are being closed to the public, not because humans are in danger but because it's not known how the disease is being spread.

This month, sick bats were discovered in caves in West Virginia.

With the stress on bees, our main pollinators, what's happening to bats is a major cause for concern.

For more about white-nose syndrome see http://www.fws.gov/northeast/white_nose.html, including a video of a U.S. Fish & Wildlife Service biologist at a mine in Chester, Mass., where the bats have WNS.

Thanks. I will definitely check it out. If there are things people can do to help (or at least not make things worse), I hope to find out. I will keep covering this (learning to love bats) so please feel free to send info.

To clarify: the white material around the bats' noses is a fungus, of the fusarium family. The question is whether this is a new, more aggressive strain of this common fungus (which ordinarily wouldn't trouble a healthy mammal), or whether their immune systems have been otherwise damaged, leading to this greater expression of a conventional fusarium. Labs are currently attempting to DNA-type the strain.

If pesticides, probably neonicotinoids (http://en.wikipedia.org/wiki/Neonicotinoids) are responsible, then we can recover after ceasing their use. My greater fear is that the bacterial toxin DNA inserted into the corn genome (http://en.wikipedia.org/wiki/Transgenic_maize#Bt_corn) has escaped into the genome of the fungus. This would mean a strain which expresses the bacterial toxin as well as the toxins native to fusarium. If that is the case, there's no putting that genie back into the bottle.