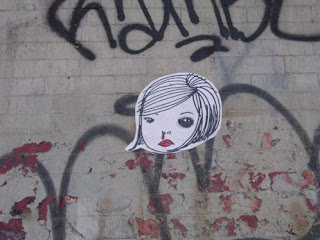 Thanks to a fall, face forward, on an uneven sidewalk, I have the first black eye I have ever had in my life-- somewhat of a misnomer, as it's really one side of my face-- but my eye is particularly horribly fascinating. I feel like Jake LaMotta as he calls for the razorblade to slit his eyelid (or was that Rocky?)

Life goes on; I treated myself to breakfast at Murphy's, worked half a day, bought cat food, spent two wasted hours in Baystate's emergency room before I decided to leave and then dealt with the (fortunately short-lived) catastrophe of having my car key break off in my door lock with no spare to be had.

Some time fairly early in the day, I noticed that most of the people with whom I was having some interaction were not making eye contact with me. They probably think I got beat up by a guy, I realized-- and do you know, at some point I found I was feeling a sense of embarrassment and shame-- as if I really had been beaten.

January 1st, following yet another brutal murder of a Springfield woman, I posted about some of the concerns that keep women from accessing help. Two weeks later the Boston Globe reported a statewide shortage of shelter beds in Massachusetts; on many days a hundred women will call the domestic violence hotline seeking shelter when there is only one bed available anywhere in the state.

Some women pick up the phone. Some women with a black eye stay home. A black eye from someone hitting you never goes away, even when others can't see it anymore.

Sometimes I don't think things have changed for the better all that much. But still-- here's the numbers to have handy:
Art found on a building in the Lower East Side