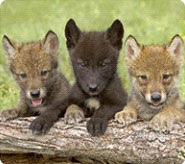 Genetic tests have confirmed that the first wolf in more than 160 years was found in Massachusetts in October, the Boston Globe reported March 4. The last confirmed sign of any wolf in New England was in 1992 east of Bangor, Maine. Are wolves on their way back in the Northeast?

Wolves had been hunted to regional extinction in Massachusetts by the mid-1800's, at about the same time that coyotes began to increase. Coyotes are often considered to be urban and rural pests; studies in Yellowstone National Park have shown that after wolves were reintroduced there in 1995, the coyote population was reduced by 50%.

Elsewhere in the country, however, wolves are not faring so well. Last month The U.S. Fish and Wildlife Service removed the protected status of wolves in Montana, Idaho and Wyoming, allowing hunting to take place. Aerial shooting of Alaskan wolves has been approved by the Alaskan state government. Wolves, foxes, bears and 10,000 other wild animals a year are being poisoned with sodium cyanide and sodium fluoroacetate in a misguided attempt to control coyotes. You can send a comment to the Environmental Protection Agency to ban these chemicals at the Care2 PetitionSite, and speak out for wolf protections at the Defenders of Wildlife website.

In November I wrote about the return of fishers and moose to Massachusetts, thanks to the increasing reforestation of our state. Seems to me that learning to share our environment with other animals will help us to save our environment for ourselves.

Thanks for this. Restore the North Woods may still be the lead group in the effort to return the wolf to our region.
See: http://www.restore.org/Wildlife/wolf.html

Hopefully, we'll do a segment about this on an upcoming Enviro Show on Valley Free Radio.