Late March round-up of news from the homeless blogs 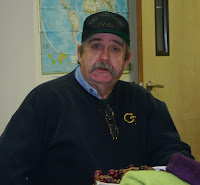 First from the straight news: The Muskogen Chronicle, Michigan, reported last week on the death of 48 year old Lonnie Gordon, a homeless man who died of hypothermia in a February stowstorm. Mr. Gordon was made to leave the Rescue Mission, where he'd been staying for several days, because he had been drinking on premises.
"We don't want to point fingers or make anyone take the blame (for Gordon's death). We just want to know why," said Judith Kell, who chairs the Continuum of Care Network. "What went wrong? How'd he fall through the cracks?"
Wait a minute-- he didn't fall through the cracks, he was pushed!
"We don't turn anyone away, and that is so important, especially in bad weather when so many (homeless people) have nowhere else to turn," Skoglund (director of Rescue Mission) said. "We exist to demonstrate and proclaim God's love to the less fortunate and homeless people of West Michigan, but there are certain rules people in the shelters have to follow for everyone's safety. We don't allow chaos. We can't allow chaos."
Heavens, No! Death before chaos! This could so easily happen in Springfield, MA-- if it hasn't already.

At Just Another Blog from L.A., M. Bouffant comments on Helen and Olga, currently on trial for murdering homeless men for the insurance they took out on them. In Nashville, Kevin Barbieux at The Homeless Guy reports on the death of a homeless woman hit by a pick-up truck.

Oldtimer Speaks Out reports on the bureaucratic snafu that almost prevented his friend Al, who'd been living in the woods for some time, from accessing transitional housing through the VA. WanderingVets comments on the people of Guerneville, CA, good patriots all, who are organizing in opposition to the construction of a Home for War Veterans. they might be dangerous!

On the organizing front, Tim Harris at Apesma's Lament says the city of Tacoma, Washington's failure to make progress on it's ten year plan to end homelessness is finally getting some media attention. Humanity for Homeless in Santa Cruz CA says the city has issued its first citation for violating the Parking Lots and Garages Trespass Law MC 9.64, which became law to prevent homeles people from using parking lots and whose enforcement has already reached ridiculous proportions-- folks were cited and dispersed for showing a silent move against the wall of a building in a non-residential district. There's a lot of information on this blog about the people's struggles. The Anti-Poverty blog in Chicago has a great analysis of the truly creepy Oprah's Big Give.

Last but not least, stop by Homeless Man Speaks for the real words of real people without a home.

Photo: Our Friend Al from Oldtimer Speaks Out.

Just a quick comment about the picture accompanying the top article.

Its placement is unfortunate because it implies that he is the man that died of hypothermia. In fact, he is Al Jordan, and he goes with the mention by Oldtimer in the mention several lines below. Al is alive and well and will be in his new apartment in Marietta on April 1st.

Keep up the good work,

Oops, now I see the photo credit at the bottom.

You know, when I decided to start a blog I grabbed Blogger and for the most part, have been satisfied...but there doesn't seem to be any way to get the photo credit right under the photo! Open to suggestions...