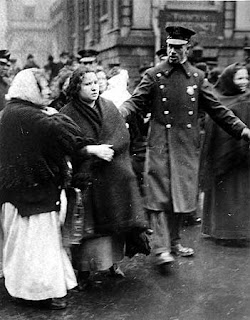 Food prices are increasing everywhere. Soybean prices have doubled in a month and gone up 125% in a year. Wheat prices have risen 90% since last March, while unseasonable weather in Canada and Australia, two main producers, has limited supply. In Asia, the price of rice has almost doubled since January, causing India, Cambodia, Vietnam and Egypt to limit or completely end exports in an effort to feed their own people. This is bad news for the Philippines, which depends on rice from Vietnam to help meet its country's food needs.

In Haiti some have returned to making cookies from salt, shortening and edible clay-- but even the price of the clay has risen. Food demonstrations have taken place inHaiti, Egypt, Zimbabwe, India, Namibia, Mexico, Cameroon, Burkina Faso, Morocco, Uzbekistan, Yemen and even in Italy. the U.N. Food Programme says that as of December, 37 countries faced food crises, and 20 had imposed some sort of food-price controls. The U.N. also says it has a $500 million shortfall to feed 89 million of the world's hungriest people.

Even in the U.S., dairy products are up 15%, fruits and vegetables 10%, and cereals and bread is up 8%. The average middle class family would spend $253 more for the same groceries this year compared to two years ago.. And 28 million people are expected to receive food stamps this year, the highest level since the program was created in 1964.

WHY? IMMEDIATE CAUSES
Prices are expected to stabilize-- in about ten years. Ten years is long enough to permanently stunt a child's life, to leach the joy from early adulthood, to rob middle-years of their bounty, to darken the hours of the elderly.

We are not without power to take those personal actions we know can help-- driving less, eating less meat, growing even a single tomato plant. But more than ever we need to work together for policy change. I have to write this because I have to believe we can make a difference.

Check out Dr. Gideon Palya's perspective on the food crisis in Countercurrents.

Photo: Food Riot, 1917. During World War I, wartime inflation severely taxed the limited budgets of working-class families. Although wages also rose during the war, they could not keep up with prices. On February 20, 1917, after confronting pushcart peddlers who were charging exorbitant rates for necessities, thousands of women marched to New York�s City Hall to demand relief. The “food riot” precipitated a boycott campaign that eventually forced pushcart prices down. Women in Boston and Philadelphia took similar action.
From History Matters.