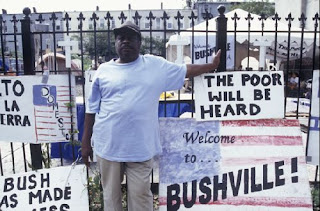 AP news is reporting that Ontario CA officials decided a tent city had grown too big-- some 400 people-- and are bulldozing it. Homeless people who can "prove" they're from Ontario can return after the land is leveled and the trash removed.

The blog News Raw - Morning was on hand for the evictions to dig a little deeper into what's happening at SoCal,, the name of the tent city.

Just found a picture of Bushville, the tent city in New York city set up by the Poor People's Economic Human Rights Campaign. About twelve Arise members, most of whom had left their own very real Sanctuary City in Springfield, MA to help protest at the Republican National Convention. We'll be back in 2008 at the John McCain annointment in Minneapolis in September.