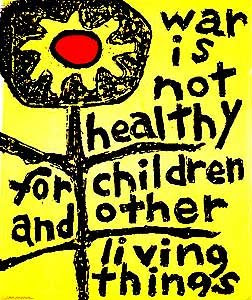 OK-- so one thing I know now that I didn't know then: it's easier to stop a war before it starts than to stop a war once it's started, and it's damn near impossible to do that.

Today I've been remembering what I and so many others were doing-- not so much exactly on March 19-- but in the months leading up to the war in Iraq. Every minute of every day that we weren't asleep was spent organizing: setting up meetings, leafletting, demonstrating, planning for demonstrating, calling Reps. Neal and Olver, training for civil disobedience, phone calling, mass mobilizations, doing everything we knew how to do.

And it wasn't easy, and I don't think we ever kidded ourselves that we had much chance of success, but we had to try.

And it wasn't easy, because let me tell you, people were mean. Bush and his cohorts in crime had done such a good job tying September 11 to Iraq that in many people's minds that to be against the war was the same as supporting the terrorists. But we had to try. We took a lot of abuse but knew it was nothing compared to what our troops and the Iraqi people would suffer.

Then the war began, and then followed forty-eight hours of demonstrations and mass arrests. I've never been much of a one for what I thought of as getting arrested for the sake of getting arrested-- but knowing that the war had begun, there really was nothing left for us to do, for the moment, to witness and resist, and that's what hundreds of us did at Westover Air Force Base in Chicopee and many other places.

Five years. One piece of this insanity that has never ceased to simply floor me is how Bush has been able to get away with it, even when the proof that he lied began to be uncovered almost right away: no weapons of mass destruction, no terrorist threat in Iraq, no ties to September 11. When I think how Nixon was brought down by Watergate, it almost seems like that happened in another world, that we could demand and receive accountability from our government-- not all the time, but when it really mattered.

Five years. In the end, activists have had to return to what we can accomplish, while never being quiet about what we know about the war. It seems like most of the U.S. has finally come around to opposing this misadventure, although I still see people's vulnerability to a good spin. But we are still so powerless to bring this war to an end. No wonder so many people have so much invested in the next presidential election. I myself am less convinced that electing a good Democrat will bring about a sea change.

Five years. I did not choose to go down to the Federal Building tonight to join the Move On demonstration in the rain-- long day organizing, I worked hard, and have to go to Boston early. But some friends of mine who are in the affinity group "8 at the Gate" were arrested at Westover today. And we will all be together again soon on another day.