TWO movies about the Chicago Trials 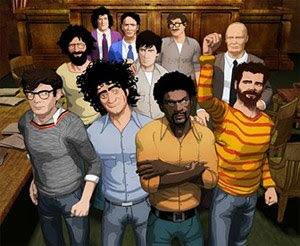 Chicago Ten, a documentary telling the story of the Chicago trials in a mix of animation and archival footage, opens this week and is getting great reviews. I wrote Thursday about Steven Speilberg's upcoming film but didn't know about this one. Andrew O'Hehir at Salon says ""Chicago 10" makes you see 1968, that near-apocalyptic year, with fresh eyes, as an extraordinary turning point in history now at least partly set free from boomer nostalgia and regret. Rubin, Kunstler and, especially, the cynical, clownish and wise Abbie Hoffman come alive as real people, not just marijuana-flavored avatars."

This make four films (that I know of) that deal with the Sixties with intelligence, the other two being Across the Universe (Roger Ebert review) and He's Not There-- (NY Times review) though the latter film spans several decades. What's the world coming to?

Al Giordano of the Valley Advocate was a personal friend of Abbie Hoffman.

Me, too, although I never met him.