The homeless: always from someplace else. 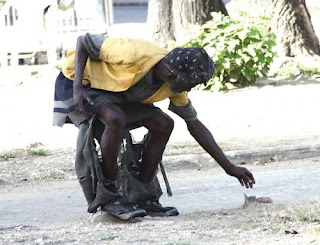 If I could draw, I'd draw a cartoon of a homeless person standing at a crossroads where the sign in all four directions says, "Not in my backyard."

"Vagrants" are wandering the streets of Port-of-Spain, capital of Trinidad and Tobago, according to a field officer at St. Vincent de Paul's Riverside Homeless Facility, because most homeless people are mentally ill and when they're let out of mental hospitals, their home communities won't deal with them.
The bedbug problem at the shelter has been greatly exaggerated, he said-- it's NOT the reason homeless people have left the shelter in droves . Newsday.

How very true. Public officials don't want to take any responsibility for the people who live in their areas.