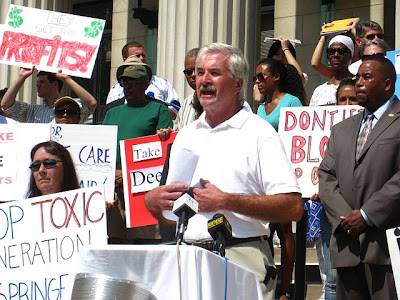 Hey, biomass developers! If you can't meet at least 50% efficiency, then you won't be considered green and renewable, meaning you will not be eligible for subsidies from the Commonwealth of Massachusetts, the Mass. Dept. of Energy has announced.

In the last three years, both pro and anti-biomass activists have spent many hours in hearings and many hours researching and submitting testimony and evidence.  Yes, we would have liked the new rules to be even stronger.  But even as they are, not a single one of the biomass plants currently operating in New England can meet the new standards-- this according to the president of the pro-bio trade group, the Biomass Power Association.

Most biomass plants operate at less than 25% efficiency.  (Can you imagine if only  25% of the gas you put in your car's tank actually took you somewhere?) Burning trees and waste wood is no more "green and renewable" than coal or oil.

Let's be clear: these new rules do not prohibit the construction of biomass plants in Massachusetts; they simply mean those plants won't qualify for Renewable Energy Credits.  The developers of the proposed biomass plant in Springfield, Palmer Renewable Energy, has said it doesn't need the RECs to operate profitably. But I can't imagine they're thrilled with the new rules.

Stop Toxic Incineration in Springfield, Arise, the Conservation Law Foundation and the Toxics Action Center have accomplished a lot this year to keep PRE from moving forward in Springfield.  The city council revoked the company's special permit that a previous, all at-large version had approved, and when the building commissioner gave PRE a building permit anyway, we and the city council successfully appealed to the zoning board.  We appealed the plant's air permit to the Dept. of Environmental Protection, and the final decision is still pending.  PRE is appealing the building permit revocation to the Massachusetts Land Court, so our fight is not over.  But Springfield residents have had three years (so far!) where our already sick air has not been made sicker by spewing pollutants and greenhouse gases into our air.

Now we get to save our RECs for energy production for those sources that deserve it.